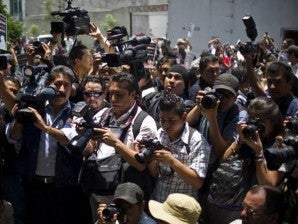 Mexican journalists take part in a protest for the murders of colleagues in Mexico, on May 4, 2012. Mexican security forces Thursday found the dismembered bodies of missing news photographers Guillermo Luna Varela and Gabriel Huge and two other people in bags dumped in a canal in the eastern state of Veracruz. AFP/RONALDO SCHEMIDT

MEXICO CITY — Mexico’s special prosecutor for crimes against journalists says 67 journalists have been killed and 14 have disappeared in the country since 2006.

Prosecutor for crimes against freedom of speech Laura Angelina Borbolla says she is aware of only one case involving the slaying of a journalist that reached sentencing.

Borbolla testified at a congressional hearing Tuesday that her unit has identified 74 suspects in reporters’ killings, but she didn’t say if any of them had been detained.

Press advocates have long called Mexico one of the most dangerous nations for reporters.

The Committee to Protect Journalists previously has said that 48 were killed or disappeared from December 2006 to the end of 2011, and five more were murdered this year. Mexico’s human rights commission lists 81 journalists killed since 2000.

Read Next
Cyber crime division warns of fraudulent online sales
EDITORS' PICK
Omicron: What science knows so far about latest Greek-lettered COVID variant
Legarda: Ending Violence Against Women, a cause for all
This new condo in the South will make you want to turn a new leaf
Smart offers wireless fiber-like speeds to Filipino homes with country’s first 5G Prepaid Home WiFi
DOH: Booster doses for fully vaxxed adults to start December 3
NGCP transmission tower in Lanao del Sur bombed
MOST READ
‘Maski na hindi ‘yung mga bright’: Duterte urges public to elect new leaders
Pacquiao to voters: If you can’t vote for me, then don’t vote for a corrupt candidate
Roque defends Bongbong Marcos: ‘He was only 15 years old in 1972’
Another disqualification petition filed against Bongbong Marcos
Don't miss out on the latest news and information.