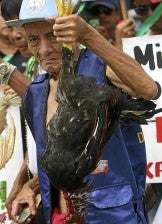 A PROTESTER carries a chicken used in rituals to ward off evil spirits during a rally at the Times Street residence of President Aquino to denounce Mr. Aquino’s new mining policy. MARIANNE BERMUDEZ

DAVAO CITY—Potential mining areas in this city, the largest in the world in terms of land size, have been stricken off the list of proposed sites for “Minahang Bayan,” or areas where small-scale mining may be allowed, according to an official of one of the government’s mining regulatory agencies.

Edilberto Arreza, head of the Mines and Geosciences Bureau in Southern Mindanao, said the MGB had listed several areas in the city as possible Minahang Bayan sites.

The bureau removed these areas from the list following vehement opposition to mining expressed by top officials of the city, particularly the daughter-father tandem of Mayor Sara Duterte and Vice Mayor Rodrigo Duterte.

President Aquino’s Executive Order No. 79, which outlines his administration’s policy on mining, prohibits small-scale mining in areas not found in Minahang Bayan sites. The MGB was tasked with identifying these sites.

At least two areas in the city—Paquibato and Marilog Districts—are believed to be mineral rich.

Arreza said he had “officially stricken off Davao City” from the Minahang Bayan list. The MGB, he said, decided to “forget the city” when it comes to mining.

The decision, said Arreza, was prompted by strong opposition to mining expressed by the city mayor and her father, the vice mayor.

In a recent interview, Mayor Sara Duterte said her stand against mining in the city will not change.

Her father, Vice Mayor Rodrigo Duterte, said he would defy Mr. Aquino’s EO 79 if it would lead to mining in the city.

Arreza said an area may be declared Minahang Bayan site only with the support of local officials.

In the case of Davao City, Arreza said strong opposition against mining expressed by the Dutertes makes it impossible for  the MGB to get support from local government officials for any move to declare any part of the city as Minahang Bayan site.

According to Arreza, the task of identifying a Minahang Bayan sites was easier elsewhere in Mindanao.

In Southern Mindanao, he said, seven areas are now on the list of Minahang Bayan sites.

These are the villages of Diat, Biasong and Borinot in Pantukan, Compostela Valley, and three areas in two other towns of Compostela Valley (Maco and Nabunturan) and one area in the town of Banay-Banay in Davao Oriental.

The MGB is in the process of declaring five more areas in Southern Mindanao as Minahang Bayan sites.

“It’s either the small-scale miners, or us, who will identify or recommend an area to be declared as Minahang Bayan site with the endorsement of the local government concerned,” said Arreza.

One of the most gold-rich areas in the country, Mt. Diwata also known as Mt. Diwalwal in Monkayo, Compostela Valley, could not be declared a Minahang Bayan site since it is currently a mineral reservation open to large-scale mining, according to Arreza.

He said the MGB has also identified areas that should be off-limits to mining, among them areas that had been tagged for tourism.

These include Samal Island in Davao del Norte; Mt. Apo, which is shared by Davao del Sur and North Cotabato; and Mount Hamiguitan and Mount Aliwagwag in Davao Oriental. Judy Quiros, Inquirer Mindanao