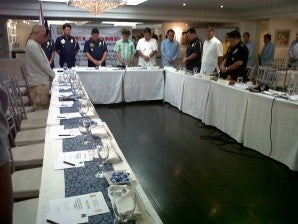 Eight out of 10 militant group leaders invited for a dialogue with the Philippine National Police on the upcoming State of the Nation Address of President Benigno Aquino III chose not to attend the meeting, alleging that police officials have been using these dialogues to justify their violations of the constitutional rights of people to assemble and air their grievances. Jamie Marie Elona

MANILA, Philippines – Leaders of various militant groups decided to boycott Monday the scheduled dialogue between them and officials of the Philippine National Police on the upcoming State of the Nation Address of President Benigno Aquino III.

Of the10 invited militant leaders, only two – Rasti Delizo of Sanlakas, and Roberto Martin of Pasang Masda – attended the dialogue scheduled at 2 p.m. at the Sulo Hotel in Quezon City.

In a statement, Bayan said they did not attend the meeting as “these dialogues have been a way for the PNP to justify its violations of the constitutional right of the people to peaceably assemble and air their grievances to the government.”

The group said PNP [officials] have used the dialogues as a way to “impose” security measures which allegedly counter people’s constitutional rights and the Batas Pambansa 880.

Bayan filed their application for a permit to rally with the Quezon City government. The group and its allied organizations seek to be permitted to hold their protest program at the Batasan Road near Congress.

Bayan said their legal counsel, Attorney Rey Cortez, informed them that the City Government has two days from the filing to act on the request of the applicant.

However, Bayan said, “It has been more than two days since we applied for a permit and we have not been contacted by the QC government. Upon follow up, we found out that the matter was referred to the QC Police District.”

The group further said that if the city government chooses to deny or modify their application, it has to inform the applicant and call for a hearing.

“It is clear that the PNP has no intention of following this provision of the law. It merely wishes to impose its restrictions with the expectation that we will meekly follow their dictates,” Bayan said, adding that the city government cannot pass on its function to approve or reject rally permits.

Last year, Bayan said the PNP and city government also committed the same violation of BP 880. A case before the Supreme Court is now pending because of this violation in which the PNP and QC governments are respondents.

The group said that their counsel told them that “any” attempt to block the protest actions during Aquino’s SONA would be a violation of BP880.

“We reserve our right to explore all our legal options should the PNP violate our constitutional rights,” Bayan said.

“We ask the Aquino regime, what is so frightening about a peaceful protest action? Why push the people away from Batasan? The people want to air their grievances, including economic issues, human rights abuses, violations of sovereignty and the lack of accountability of erring officials,” Bayan said.