Enrile, Belmonte urged to talk to Aquino on Charter Change 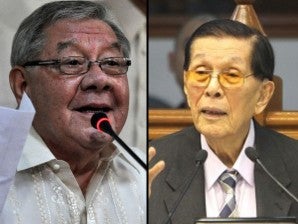 Gonzales told Radyo Inquirer 990 AM in an interview that such a discussion with the President was important to explain the 15th Congress’ intentions in pushing for the amendments.

He said that charter change was a purely legislative initiative but admitted that even with a constituent assembly, the House of Representatives and the Senate would face a difficult time pushing for it without Aquino’s support.