Suicides up in last 20 years in PH, mostly among young – NSO 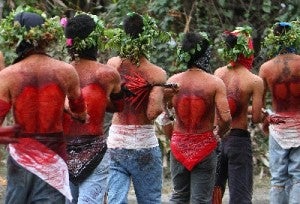 Majority of suicides were carried out at home during summer, particularly during the Lenten season when Catholics observe fasting, prayer and penitence.

MANILA, Philippines — The suicide rate among Filipinos has gone up in the last 21 years with the majority of cases involving young people aged 24 years old and below, according to studies.

They also showed that in most instances, the person who committed suicide did so during summer or in the morning when all family members had gone off to work or school, leaving the house empty.

While the figures might seem insignificant compared with those from neighboring countries that recorded the highest suicide rates, the numbers have gone up from 1984 to 2005, especially among the Filipino youth, said Dr. Dinah Nadera, a psychiatrist and an associate professor of the University of the Philippines’ Open University who has been working on a suicide prevention strategy.

“This simply means that there is an increasing trend of suicide [especially] among the youth, particularly in the age group 5 to 14 and 15 to 24,”  Nadera said at last week’s media consultation on suicide prevention conducted by the World Health Organization (WHO) in Manila.

Meanwhile, a study of around 300 cases collected from the records of hospitals and the police in 2008 and 2009 also revealed that the majority of suicides were carried out at home during summer, particularly during the Lenten season when Catholics observe fasting, prayer and penitence.

“Of course, this is based on findings from selected cases. We are not saying that this is the general trend for both [suicide and attempted suicide cases],” Nadera said.

Most of the suicides that were studied occurred in the morning—between 8:01 a.m. and noon—and on weekdays.

“This is the time when people usually leave the house and go to work and this person who wants to die goes back when no one is home and carries out the suicide when there is no one there,” she explained.

In contrast, the least number of cases were reported between 12:01 a.m. and 4 a.m., Nadera noted.

The study also showed that the “leading methods” chosen by those who decided to end their lives was hanging, strangulation and suffocation. For those who tried to kill themselves but ended up just sustaining injuries, the preferred means ranged from self-poisoning (mainly ingestion of silver cleaner) to exposure to other unspecified chemicals and noxious substances.

Nadera also noted that not all cases were due to depression. She stressed that while it might be a contributory factor, other factors could lead to a person’s decision to end one’s life such as low income and unemployment, medical conditions such as heart diseases and cancer; and marital status.

A rising number of cases has also been observed among married women compared to single women, she noted.

Dr. Wang Xiangdong, WHO regional adviser in mental health and injury prevention, sounded the alarm over the growing number of people resorting to taking their lives among the young, stressing that suicide must be considered a public health issue rather than a mere event to be treated as a police case.

In the Western Pacific Region, which consists of 37 countries and areas, including the Philippines, suicide is the leading cause of death in the age group of 15 to 39, according to Wang.

“There are big gaps to effective suicide interventions and these are gaps in knowledge, gaps in translations of existing knowledge into interventions,  and gaps in mental health and crisis support system,” Wang told the media recently.