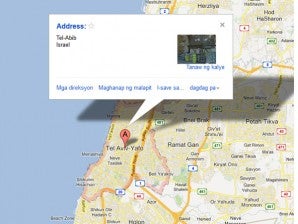 TEL AVIV – A protester was in hospital in a serious condition after setting himself alight at a march for social justice in Tel Aviv late Saturday, police said.

“He left photocopies in the street of a letter that he had read out before setting himself on fire,” police spokeswoman Luba Samri told AFP, adding that the man was in his forties.

“For us, it’s an attempted suicide,” she said.

Witnesses quoted by the news website Ynet also said the man had read out the letter before soaking himself with a flammable liquid and setting fire to himself.

“The Israeli state has stolen from me and left me nothing,” said the letter, quoted on Ynet.

“I accuse Israel, (Prime Minister) Benjamin Netanyahu and (Finance Minister) Yuval Steinitz for the constant humiliation that the citizens of Israel must endure on a daily basis,” the letter continued.

“They take from the poor to give to the rich,” it said.

Police estimated that around 8,000 people took part in two separate marches Saturday evening. Hundreds of protesters also turned out in Jerusalem and Haifa.

The demonstrations were to mark the first anniversary of mass protests against the spiralling cost of living.

“I hope that a lot of people are going to march … and they are going to continue to fight for a better future in this country,” one of the movement’s main movers last year, Dafne Leef, told AFP.

“The last year has been really packed,” she said.

“If there had been as many advances as unfulfilled promises we would be in a much better situation,” she added.

After the initial wave of protests last year, in which hundreds of thousands of people took to the streets, the government set up a committee to look at reforms to meet the grievances of the protesters.

But only a limited number of such reforms have actually been implemented, say campaigners.

Organizers of the march in Tel Aviv had hoped a strong turn-out would help revive the movement, but they did not get the tens of thousands they had hoped for. And this year, the campaign has also been weakend by internal divisions.

In parallel with the main march, about a thousand people marched elsewhere in Tel Aviv, police said.

Efforts in recent months to reinvigorate the protest movement have only managed to get a few thousand demonstrators out on the streets, a far cry from last September, when nearly half a million Israelis marched in protest.