US tells China: We’ll maintain our enduring presence in Spratlys 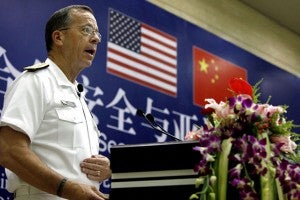 Beijing—The top US military official visiting China on Sunday expressed fears disputes over the Spratlys could lead to serious conflict and vowed to maintain its presence in the resource-rich waters.

China has been embroiled in a row with the Philippines and Vietnam in recent months over what each government sees as intrusions and illegitimate claims in the stretch of ocean spanning key shipping lanes.

“The worry, among others that I have, is that the ongoing incidents could spark a miscalculation, and an outbreak that no one anticipated,” Adm. Mike Mullen, the chair of the US Joint Chiefs of Staff, said at the start of a four-day visit to China.

Despite unease over China’s growing military capabilities and assertiveness in the disputed waters, US-China military relations have thawed in recent months and Mullen’s trip to China is seen as a reciprocal visit for the one his Chinese counterpart made to Washington in May.

That visit by People’s Liberation Army (PLA) Chief of the General Staff Chen Bingde marked his country’s highest-level military talks with the United States since China severed ties in early 2010, furious about $6.4-billion in US arms sale to Taiwan, which Beijing considers a renegade province.

The United States has pledged its support to the Philippines in the West Philippine Sea, which is believed to harbor rich oil and gas reserves.

But China—which refers to the strategic body of water as the South China Sea—insists on handling the disputes over the region on a one-on-one basis rather than multilaterally, a strategy some critics have described as “divide and conquer.”

The Philippines, China Malaysia, Brunei, Vietnam and Taiwan all claim territory in the West Philippine Sea. China’s claim is the largest, forming a vast U-shape over most of the sea’s 1.7 million square kilometers, including the Spratly and Paracel archipelagos.

China and the United States broached the West Philippine Sea issue at talks in Hawaii in June, and the topic could dominate the agenda at an upcoming Association of Southeast Asian Nations (Asean) meeting involving the group’s foreign ministers in Indonesia.

The official English-language China Daily newspaper said in an editorial on Friday that Asean should not tolerate attempts by outside forces to interfere in bilateral disputes, a thinly veiled swipe at US promises of support for the Philippines and proposed military exercises with Vietnam.

But Mullen, while emphasizing US desire to see a peaceful resolution to territorial claims in the West Philippine Sea, also said Washington would not quit the region.

“The US is not going away. Our enduring presence in this region has been important to our allies for decades and will continue to be so,” Mullen said.

Chinese and US ships have been involved in stand-offs in the seas off China in the past few years, and Beijing has repeatedly complained about US reconnaissance patrols.

China is also expected to launch its first aircraft carrier soon, which would add to its growing military clout just as other powers in Asia are becoming uneasy about its increasingly strident claims over disputed seas in the region.

Asked about the carrier, Mullen suggested that having an aircraft carrier and deploying it effectively are two different things.

“There is great symbolism associated with that aircraft carrier and I understand that. Sometimes matching the actual capability versus the symbolism, there can be a gap there,” he said.

Mullen’s visit to Beijing is the first of its kind in four years. The two governments are trying to improve military-to-military ties after setbacks over US arms sales to Taiwan, cyberattacks traced to China and concern about Beijing’s military buildup.

A thaw began when then US Defense Secretary Robert Gates visited Beijing in January, followed by a trip to Washington by Chinese President Hu Jintao.

Mullen said that sound ties between what he called the two “Pacific powers” were vital.

“Frankly, I think we need to work a lot harder on strategic trust and transparency,” he said.

The admiral referred repeatedly to Washington’s commitments to Asian allies and a prominent regional role. That indicated Beijing will face resistance to any pressure for a smaller US presence as Chinese military power grows.

During his visit, Mullen was due to meet with Chen and other military officials, speak at a university in Beijing and visit Chinese bases.

Mullen said Washington would welcome China’s military development if it would help solve global problems such as piracy. But he said Washington also wanted to clarify Beijing’s intentions.

China’s military budget of $95 billion this year is the world’s second-highest after Washington’s planned $650 billion in defense spending. Beijing is developing weapons such as the “carrier killer” DF 21D missile that analysts say might threaten US warships and alter the regional balance of power.

“There are some very specific capabilities that are being developed here that are very focused on the United States capability,” Mullen said. Reports from Reuters and AP