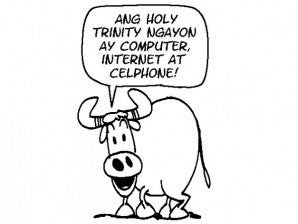 Manila Archbishop Luis Antonio Tagle on Saturday poked fun at the spelling shortcuts that many Filipinos use in sending text messages through their cellular phones.

Speaking at the First Catholic Social Media Summit in Marikina City, Tagle said even some of his doctoral theology students had gotten the bug, spelling “Holy Trinity”—referring to the core Catholic belief in the mystical union of the Father, Son and the Holy Spirit—as “3nity.”

“Would you give [those students] an MA?” Tagle asked.

“When you use the Internet, do you use it as a follower of Christ?” Tagle asked. Eh sa spelling na spelling pa lang hindi alam si Kristo, eh. Especially a graduate of a Catholic school who does not know how to spell. I’m a teacher and I’m alarmed,” he said.

Tagle also observed that personally written greetings sent through the mail, either as letters or greeting cards, are disappearing.

“I just had my birthday the other month … I received not more than 20 birthday cards and letters. The art of letter writing and card sending is slowly disappearing,” Tagle said.

Tagle, however, praised the potential of social networking and social media as “a great equalizer.”

“You can see even vendors in the markets selling fish while texting,” he said. “The possession of knowledge and information is a sign of power. Now, let us rejoice in the fact that, thanks to social media, information can be spread to a wider audience.”

Tagle said the scrambling to get as many friends as possible on social networking sites might actually be a sign that people are getting lonelier in an age when the world is supposed to be more interconnected through social media and the Internet.

“Before, it could take years before you truly call someone a friend. I think it’s indicative of some longing of the human heart to be connected with others. This haste to have more friends is proof, maybe, that the world is sadder,” Tagle said.

Tagle urged the audience to use the word “friend” seriously and not reduce it to a “mere label.”

“Don’t use it simply to prove to somebody else that ‘I have more friends than you do,’ such that it becomes more of a contest rather than a Christian response to people who need to be connected, to be loved, to be heard, to be understood, to belong,” he said.

“And even in the absence of the gadgets, cell phones, computers, we can still connect,” he continued. “Let us not forget the basic human relationships that are always available. A smile, a recognition of the other person. People can feel your touch. People can see your tears. People can hear hear your voice cracking out of compassion.”