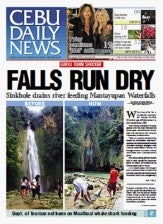 What used to be a majestic cascade of water in the Mantayupan Falls is now a dry rock face cliff.

The water suddenly disappeared after the river that fed the nature spot was drained by a sinkhole that formed in dry land on Wednesday in Barili town.

“This is a serious concern that needs an immediate solution,” said Barili Mayor Teresito Mariñas yesterday during a dialogue with worried stakeholders because the change affects tourism, farms, livelihood and a hydroelectric plant.

The disturbing phenomenon falls a week before the town expects an influx of visitors for its annual fiesta July 17 to 26.

As a tourist spot, Mantayupan Falls attracted more visitors this summer, after the Kawasan Falls in the same town was temporarily shut down last May by the Cebu provincial government to remove illegal cottages and structures.

With part of the river dried up, rice fields, tilapia ponds, and a rural water system in five areas of the town were affected.

This includes a mini hydro plant of the Cebu Electric Cooperative I that relies on the waterfalls to produce electricity.

A Cebu Daily News team visited the falls yesterday and saw only a pool of stagnant water.

The sinkhole was first reported on Wednesday by farmers.

It drained a portion of Mantayupan river at the boundary of barangays Nasipit and Mantayupan.

Some residents blamed a quarry operation in the river for causing the ground to cave in where the sinkhole appeared.

At the sinkhole, many curious bystanders and residents gathered to look at the site despite an improvised warning sign printed on a sack that said the area was “off limits”, especially to children, because it was dangerous. A prohibition was mentioned against doing laundry there.

At past 11 a.m. a team from the Mines and Geosciences Bureau (MGB) of the Department of Environment and Natural Resources (DENR) in Region 7 inspected the area.

Led by senior geologist Abraham Lucero, they measured the depth of the hole with a rock tied to one end of a tape measure.

The device marked out a depth of 4.5 meters deep before the rock got stuck. He advised Barili officials to fence off the area with barbed wire.

To determine how wide the hole is, Lucero said they will ask their Environment Management Board (EMB) central office in Manila to lend them a ground penetrating radar system (GPRS) which can detect the dimensions of the hole up to a depth of 30 meters.

When CDN visited the sinkhole last Wednesday, water from the Mantayupan river was still flowing downstream to the majestic waterfalls.

But yesterday, the water remained in the hole which appeared Jacuzzi-like with water gushing out from underneath.

HEAVY rainfall, and illegal sand and gravel extraction are two theories behind the formation of the sinkhole in Barili.

Senior geologist Abraham Lucero of the Mines and Geosicences Bureau (MGB), cited two reasons for the cave in.

First, is the volume of rain in the last two to three days.

According to Lucero, the rainfall must have flooded or saturated (“naanod”) the sand and gravel in the riverbed, causing an underground cavity to give way.

Second is extraction of sand and gravel in the area by backhoe equipment owned by a certain Constantine Tansan, who owns an organic farm at least 20 meters away.

Lucero said that with the terrain of Cebu province being 70 percent limestone, it’s common for sinkholes to form.

“Siguro sa kanipis sa cavities nihunlak siya sa ilawom (Perhaps because of the thinness of the cavities, it caved in from underneath),” he told CDN.

Mines Estomo, an 80-year-old resident of barangay Nasipit, told CDN that a big cave existed underneath.

The water used to flow beside the cave, he said.

But an incident way back caused a landslide in the area that diverted the river to where the sinkhole is now.

He also recalled that in the 1980s during Typhoon Ruping, a rush of sand and gravel and other stones in the mountain covered the hole.

It was not opened not until last Tuesday.

Some residents blamed an ongoing backhoe excavation as the cause of the sinkhole in Barili.

Rey Gentapa, the backhoe operator, said he was just extracting sand and gravel when the sinkhole developed two meters away.

He recalled hearing a loud explosion when it happened.

“It was my third load… I did not touch it. Then I saw the water drain into the hole,” he said in Cebuano

No permit was issued for sand and gravel hauling in the Mantayupan River, said Barili Vice Mayor Marlon Garcia.

Garcia said residents reported to him that the quarry operation has been going on for three weeks.

He said the Barili municipal council will investigate the drying up of the waterfalls linked to the sudden formation of the sinkhole.

The caretaker of the Tansan’s organic farm, Danny Gadiana said they just started extracting sand and gravel last Tuesday to fill a portion of the road going to their farm.

The farm owner, who is in Thailand, has been informed.

“We are not pointing fingers but we will not discount their liability,” he said.

“As diplomatically as we can, we will talk with them.”

Alan Navarro said they were laying the pipes to channel the pool of water in the first waterfalls to their tilapia farm 20 meters away.

He said the water level in the fish farm was going down.

Visitor fees in the Mantayupan Falls are collected by the Campangga Multi-purpose Cooperative (Campco).

Marcosa Bayadog, a member of the cooperative, said they padlocked the entrance to the first falls since Wednesday when the water dried up.

The coop started operating the site in 2005 and has been earning steady income.

On regular days, she said they usually earn P5,000 per day from entrance fee, cottage rentals and other services.

In summer, they earn as much as P40,000 per month from entrance fees alone.

Mantayupan Falls has been an alternate destination of foreign tourists and local visitors since the Kawasan Falls remains temporarily closed.

Bayadog said they were looking forward to many visitors for the town’s annual fiesta celebrated from July 17 to July 26.

Jurry Lazaga, a native of Oroqueta in Mindanao visited the area yesterday with relatives for a family outing.

It was his first time to be there.

“Sayang kay tungod sa human error na-ingon ani ang falls (It’s sad because of human error the water falls have to be like this),” he told CDN.