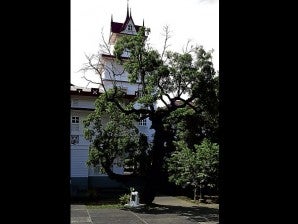 AGUINALDO'S CHICO. The Chico tree (Manilkara sapota L.), one of the trees in the backyard of the Emilio Aguinaldo Shrine in Kawit, Cavite province, was planted by General Aguinaldo himself and was said to be one of his favorites, according to former museum gardener, 70-year-old Vener Vales. EV ESPIRITU/INQUIRER NORTHERN LUZON

If only trees could talk, they would regale us with historical tales they have witnessed firsthand.

They are the living links to the past that no man has recorded.

Trees are ultimate symbols of strength and fortitude. It’s a pity they could only witness, not join the Philippine Revolution. But be a witness, they did.

The centuries-old Kalayaan Tree or Siar (Peltophorum pterocarpum), located in a churchyard in Malolos, Bulacan province, has been a living witness to many historic events that transpired in the area. It was in Barasoain Church where three important events of our country took place: the convening of the First Philippine Congress on Sept. 15, 1898; the promulgation of the Philippine Constitution, popularly known as the Malolos Constitution on Jan. 21, 1899; and the inauguration of the First Republic on Jan. 23, 1899, establishing the Philippines as the first democratic country in Asia.

The Siar was then a young tree standing a few meters from the convent where Gen. Emilio Aguinaldo found temporary refuge. Revolutionary field officers waited under its shade to see the general and report on the battles won and lost by the revolutionaries. It was where Katipuneros waited for battle orders or military mission.

Townspeople cheered Aguinaldo by this tree as he looked out the window or as he rode in his carriage on his way to the congress session at Barasoain Church.

When Aguinaldo left Malolos, the convent headquarters— with all the important government papers—had to be burned. The Siar tree was badly damaged but it has managed to survive.

Earlier, on the same plaza fronting the historic edifice, daring young women bravely stood before visiting Spanish Governor General Valeriano Weyler and presented a petition for the opening of a night school. Jose Rizal admired the courageous act of these women of Malolos that he wrote a letter in honor of them.

Siar is a hard and durable tree. It is not a native species although it is not known how it reached the Philippines. It has adapted itself well in different parts of the country and is now widely found in Luzon and Mindanao. It is planted as an ornament because of its bright yellow flowers.

The chico tree (Manilkara sapota L.), located in the backyard of the Emilio Aguinaldo Shrine in Kawit, Cavite province, was planted by the general. Reportedly one of his favorites, the tree was a mute witness to his intimate talks with his comrades of the revolution and of gatherings such as the proclamation of Philippine Independence on June 12, 1898.

The Kapitan Idong Tree (Magnifera indica), a mango tree named after Dasmariñas, Cavite, revolutionist Don Placido Campos, had been a witness to the historical event of Feb. 25, 1897, when Spanish troops massed under its shade to attack the Catholic Church, then held by the revolutionists. After six months, the Spanish Army came back and launched an attack on the church to regain the area. The revolutionaries fought hard but failed due to the superior arms of the Spanish forces. After the Filipino-American war, a civil government was established and Kapitan Idong was chosen president of Dasmariñas.

Every June 12, a simple Independence Day celebration  takes place in the area under the joint auspices of the Knights of Columbus-Novaliches District Assembly of the Saint Maximilian Kolbe Parish Church and  Metro Manila College.

The Death March Tree (Tamarindus indica L.), a sampaloc (tamarind) tree located between Kms. 121 and 122 National Highway, Sta. Rosa, Pilar, Bataan province, had also seen many historic events. On April 10, 1942, it witnessed the suffering of the Filipino and American troops who marched by this area after the surrender of Bataan to Japanese forces.

In the 1980s, these trees were recognized by the National Historical Institute and the Tree Preservation Foundation of the Philippines for their historical significance. Markers were placed around them, extolling the historicity of events that transpired in their respective areas.

Trees are one of the most fascinating creations of God. A tree may grow to an incredible size and live to an almost unbelievable age.

There are trees which are considered historical and there are those connected with religious beliefs like the Bodhi tree, a sacred fig tree under which Buddha obtained enlightenment. The Anne Frank tree, a horse-chestnut tree in the city center of Amsterdam, which was mentioned in Anne Frank’s “The Diary of a Young Girl,” was a sacred tree of remembrance for Holocaust victims. Unfortunately, the tree was destroyed in a storm in 2012.

Not a few old trees found in different areas in the Philippines witnessed various events in our history or were part of momentous events. They were the silent witnesses of our past. However, it’s sad that many trees, especially  in Metro Manila, had been cut down due to road widening projects, construction of buildings or subdivisions. Because of progress, old trees are being taken down from the roads— and out of our memory.