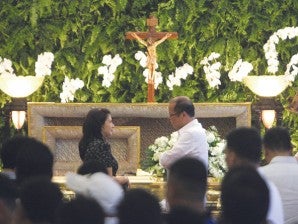 DAY OF REMEMBRANCE President Aquino condoles with Dolphy’s longtime partner Zsa Zsa Padilla at Heritage Park in Taguig City on Thursday. The President has declared Friday a national day of remembrance in honor of the nation’s king of comedy who died on Tuesday night. RAFFY LERMA

President Benigno Aquino on Thursday said he favored the conferment of the national artist award on Rodolfo  “Dolphy” Quizon but there is a process that has to be observed.

“I agree with the proposal,” he said, but added that a process needed to be observed and that this required, among others, that officials of concerned agencies debate and vote on this before he could approve the award.

“In truth, I only have a ministerial role here,” Mr. Aquino said.

The remains of Dolphy, who died at the age of 83 on Tuesday after a long battle with a debilitating pulmonary disease, were transferred to the sprawling Heritage Memorial Park before dawn Thursday— hours after people he had touched paid tribute to him in a two-hour televised show, “Handog ni Pidol,” at the ABS-CBN studios in Quezon City.

The President acknowledged a growing clamor to declare Dolphy a national artist, he, who made millions of Filipinos laugh through good times and  bad over six decades as the king of comedy on stage, radio, television and movies.

The National Commission for Culture and the Arts (NCCA) Thursday reiterated that while the NCCA recognized the clamor to confer the award on Dolphy, the policy remained that any nominee would have to undergo the selection process.

“We fully recognize and appreciate his artistic contributions in the country—encompassing several generations. He was able to lighten the burden of living for many Filipinos because of his sense of humor which appeal very much to the Filipinos, and alleviate national pain, especially during times of crisis,” the NCCA said in a statement mourning the death of Dolphy.

The NCCA and the Cultural Center of the Philippines screen nominees and submit a list of seven national artist awardees for the President’s approval.

NCCA Chairman Felipe de Leon Jr. told reporters on Wednesday that the commission may posthumously grant Dolphy a separate honor, the Dangal ng Haraya lifetime achievement award, which is given every February. It is the highest award given by the commission to those who have made a significant contribution to Philippine culture and arts.

De Leon called Dolphy a “national treasure” and “a true gem of the film and television industry.” However, he said that the selection process for the national artist award was “too slow” as it had to screen hundreds of nominees, and the commission lacked personnel and had limited budget.

He noted that the late comedian was nominated for national artist in 2009 and this could be “carried over” to this year’s nomination list. The selection process started this month and ends November.

In the interview with reporters Thursday, Mr. Aquino noted that there was still a pending case in the Supreme Court that questioned the declaration of the last awardees.

“We don’t want a repeat of this,” he said, referring to the controversy over awards granted by the administration of then President Gloria Arroyo to movie director Carlos Caparas, among others.

Mr. Aquino said he deeply respected Dolphy, who he stressed helped society very much through the arts he had pursued all his life. “He helped a lot of people and we really need to highlight him as a good example for the next generation,” the President said.

Malacañang announced Thursday night that the President declared Friday a National Day of Remembrance in honor of the late actor.

“The President asks all our countrymen to reflect on the art and artistry, the personal kindness and generosity, and deep patriotism, of Dolphy, and the manner in which he exemplified in his works and life, the positive values of the Filipino people. The President asks all our countrymen to make this Day of Remembrance a celebration of the full life that Dolphy, with utmost generosity, shared with the country,” the Palace said in a statement.

Police have mobilized a 25-member security force for the expected surge of fans at his wake, according to Senior Superintendent Tomas Apolinario Jr., chief of the Taguig Police.

The family announced there would be a  public viewing from 8 a.m. to 3 p.m. until Saturday. He will be buried at 3 p.m. on Sunday, also at Heritage Park. With reports from Marinel R. Cruz and Nathaniel R. Melican