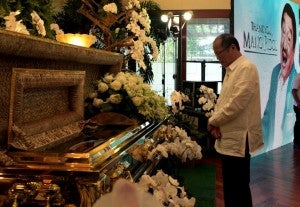 Upon arrival, the President used a back entrance and walked past the reporters without giving a word.

While inside, Aquino talked to Quizon’s partner Zsa Zsa Padilla, and left just after around 15 minutes.

The President earlier is considering declaring a national day of mourning for Dolphy.

Abigail Valte, a spokesperson of Aquino, said Thursday that the President was now looking at pertinent documents concerning the possible declaration of a day of mourning for the entertainment icon.

“It’s being considered, it’s being studied. The necessary documents for the proposal are already with the President,” Valte told reporters.

Valte reminded reporters that traditionally, a national day of mourning is declared on the day of the burial of the person concerned.