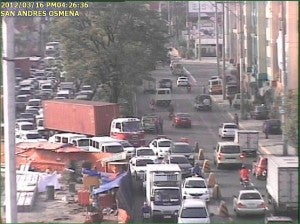 MANILA, Philippines — A 12-year-old boy was killed and another was injured after they were hit by a car with an alleged drunk driver behind the wheel  in Manila early Thursday, a Metropolitan Manila Development Authority-metrobase official said.

Alpha 1 Dang Rosolada said the boy, identified as Joshua Tanao de Luna, along with another unidentified victim, were hit by a Mitsubishi Adventure (WSW 194) driven by one Edgardo Cruz Herrera Jr. along the southbound lane of Osmeña Highway corner San Andres,Manila around 6:17 a.m.

Instead of pulling over to check on the people he hit, Herrera allegedly sped even faster but was eventually cornered and arrested, radio reports said.

Other information on the incident were not readily available.