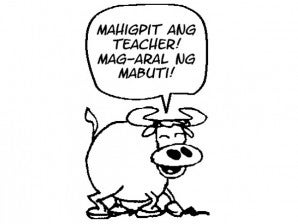 Something remarkable is happening behind bars across the country.

Passing equivalency tests for the elementary and high school levels has skyrocketed in the country’s prison system.

The reason: Jailed teachers are getting a second chance, and giving others the same.

The Department of Education (DepEd) said 100 percent of the inmates who took this year’s elementary equivalency test passed the exam, more than double the 48 percent passing rate in 2010.

The passing rate in the high school equivalency test increased from 29 percent in 2010 to 86 percent this year.

The DepEd has tapped teachers doing time to augment its limited teaching force for the Alternative Learning System (ALS), which brings basic literacy to the out-of-school sector.

“The ALS curriculum is brought to prisons by our mobile teachers.  However, we found that there are some inmates who are teachers themselves,” said Carolina Guerrero, head of DepEd’s ALS bureau.

“So we told our [program] implementers to give them special training to become instructional managers,” she told the Philippine Daily Inquirer.

The ALS crew includes both detainees awaiting or undergoing trial and convicts sentenced to be imprisoned for various crimes, including  money disputes, abuse and drug cases, Guerrero said.

“It helps them retain their professional competence and gives them a chance to earn the recognition of their peers,” said Guerrero, referring to the program.

She could not give the total number of inmate teachers currently serving in the ALS program, but said the practice was widespread in other detention centers and prisons.

“They never said that just because you killed someone, you can no longer teach. We’re not judging them for that. Besides, we really lack mobile teachers, and it’s all for literacy,” she added.

Education Secretary Armin Luistro said the teachers’ participation in the program was also part of their rehabilitation while in jail.

“They are actually licensed teachers and college professors but, due to some circumstances, they are serving time in prison. As part of their rehabilitation program, they were given the task of teaching their fellow inmates,” Luistro said in a statement.

At the Correctional Institution for Women (CIW) in Mandaluyong City, for instance, 21 inmate teachers had helped some 252 inmate learners post high scores in their equivalency tests.

The ALS Accreditation and Equivalency Test is administered to ALS students who finished basic literacy courses corresponding to either elementary or high school level.

ALS classes at the CIW are held at the facility’s library and conference hall, which prison officials agreed to lend to the program, the DepEd said.

“The ALS program for both learners and instructional managers is beneficial to them because they were given merits and commendable credits. The ALS program started in 2008 and the progressive results of the A&E test for three consecutive years attest to the effectiveness of the program,” said Mandaluyong City ALS Supervisor Josefina Espeso.

The ALS program is DepEd’s off-campus arm to reach out-of-school children, youth and adults as part of the government’s Education For All program.

Classes offer students life-learning skills that are not based on textbooks, according to Guerrero.

“Our approach is giving them life skills, not so much content-based,” she said.

Read Next
Enrile, Belmonte talk Charter change
EDITORS' PICK
IATF to LGUs: Issue ordinances vs attacks on frontliners, COVID-19 patients
10 Filipinos positive for COVID-19 in UK, 7 in Ireland — envoy
Nograles: Cabinet members to donate 75% of monthly salary to aid COVID-19 fight
Diokno to Duterte: OK to make fun of buck tooth, but focus on people’s needs first
Robredo spox thanks Duterte for defending VP’s efforts vs COVID-19
Quick chat with Nicole Andersson: ‘You really don’t need much to be happy’
MOST READ
Gov’t mulling quarantine period extension of 15-20 more days
Sotto on Isko Moreno’s call: We do our job without the media following our every move
Cook more and eat less: Tips on your quarantine diet
ADB warns PH against prolonged lockdown
Don't miss out on the latest news and information.