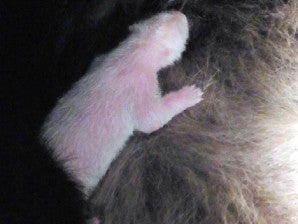 TOKYO—A baby giant panda born last week at a Tokyo zoo died of pneumonia on Wednesday, according to park officials who had initially hailed the birth as rare success for Japan’s captive breeding program.

The unnamed infant, Ueno zoo’s first baby panda born in 24 years and its only one conceived from natural sexual intercourse, succumbed to the illness just a week after its birth sparked excitement across Japan.

The zoo said keepers found the baby lying on its back against its mother Shin Shin’s stomach.

“They administered a cardiac massage and other treatment, but unfortunately they confirmed its death at 8:30 am (2330 GMT),” it said.

Shin Shin and her mate Ri Ri were leased from China last year to the zoo operated by the Tokyo Metropolitan government at an annual cost of about one million dollars.

The baby was hailed in China, which has sometimes hostile relations with neighboring Japan.

“The giant pandas are messengers of friendship,” a Chinese foreign ministry spokesman said in response to news of the birth last week.

“We hope that people-to-people sentiment and overall relations between China and Japan can be promoted because of the birth of the cub.”

China is famed for its “panda diplomacy”, using the bears as diplomatic gifts to other countries. About 1,600 remain in the wild in China, with some 300 others in captivity worldwide—mostly in China.

As many as 16 giant pandas have been born in Japan, according to reports.