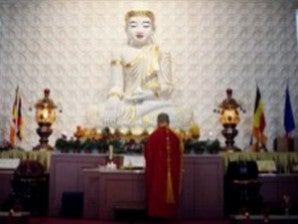 A monk is seen inside the "big Buddha room" (Grande salle de Bouddha) on June 24, 2012 in Bussy-Saint-Georges outside Paris, at the Europe's largest Buddhist temple. In Taiwan, two women plan to tie the knot next month in the country’s first same-sex Buddhist wedding, as gay and lesbian groups push to make the island the first society in Asia to legalize gay marriage. AFP / KENZO TRIBOUILLARD

TAIPEI—Two women plan to tie the knot next month in Taiwan’s first same-sex Buddhist wedding, as gay and lesbian groups push to make the island the first society in Asia to legalize gay marriage.

Fish Huang and her partner You Ya-ting, both 30, will receive their blessings from Master Shih Chao-hui at a Buddhist monastery in north Taiwan’s Taoyuan county on August 11.

“We decided to get married last year,” Huang told AFP Wednesday. “After being together for six years, we feel we need to make a life-long commitment to each other.”

As a group of Buddhist monks and nuns chant sutras, the couple, both wearing white gowns, will declare their love for each other in a ceremony expected to be witnessed by dozens of close friends.

Huang, a social worker at a Buddhist cultural foundation, said her mother had promised to attend the event but her father remained undecided.

“My father likes Ya-ting, and he says the marriage will make him feel like he has one more daughter,” Huang said.

“Still, time and again, he has voiced his hope that I marry a man… In fact, my decision to marry Ya-ting is also meant to make him drop the thought.”

You’s parents are still reluctant to agree to the planned marriage even though it will have no legal force, Huang said.

Taiwan is one of the most culturally liberal societies in East Asia, and gay and lesbian groups have been urging the government for years to make same-sex marriage legal.

In an event aimed at creating awareness about the issue, about 80 lesbian couples tied the knot in August last year in Taiwan’s biggest same-sex wedding party, attracting about 1,000 friends, relatives and curious onlookers.

The island’s cabinet in 2003 drafted a controversial bill to legalise same-sex marriages and allow homosexual couples to adopt children.

However, President Ma Ying-jeou has said public consensus was needed before the government can move ahead with the law.

Master Shih Chao-hui, who will perform the ceremony and is seen as a liberal on social issues, said her act would reflect the spirit of Buddhism.

“I would like stand up to give blessings to the couple because I hope my step can embody the spirit of Buddhism spreading compassion throughout the world,” said Shih, who is also a professor at Buddhist Hsuan Chuang University.

“As a matter of fact, Buddhist teachings do not discriminate against gays and lesbians and do not consider human desires as a sin although they do call for restraint.”

However, there is no consensus among Taiwanese Buddhist clerics about the issue, as reflected in the words of Master Huei Kai, a professor at Fo Guang University in the south Taiwan’s Kaohsiung city.

“True, no ancient Buddhism scriptures mention gays, but that does not necessarily mean that Buddhism agrees to them,” he told the United Daily News, a Taipei-based newspaper.

“As a respected Buddhist master, her move may somewhat change the biased attitude of lots of people,” Wu Shao-wen of the rights group said.