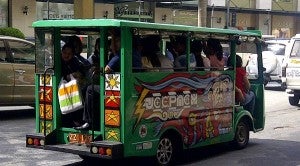 MANILA, Philippines—Transport groups have called for an increase in fares following the hike in fuel prices this week, which drivers and operators believe to be the first of many to come.

Efren de Luna, president of the Alliance of Concerned Transport Operators (ACTO), said minimum jeepney fares in Metro Manila should be brought to a record high of P10 for the first four kilometers of every trip.

“We want our petition with the LTFRB [Land Transportation Franchising and Regulatory Board] to be revived because diesel prices increased by P1.40,” he said in an interview Tuesday.

Together with diesel, pump prices for unleaded gasoline rose by P1.55 per liter; and regular gasoline by P1.80 per liter.

“We are afraid that the oil price hike will lead to more price increases in the months to come,” De Luna said. “It usually takes fare hike petitions three months before they are acted on so by the time an adjustment in fares is made, if at all, oil prices will be much higher than today,” he said.

Apart from asking for an adjustment in fares, De Luna also called for more transparency, asking oil companies to explain their decision to hike prices.

“Why is it that prices are increasing even though the peso is getting stronger, and world oil prices are declining?” De Luna asked. “The government is not keeping a close eye on these oil companies and it’s the commuters that are suffering because of it,” he said.

He also renewed calls for the government to intensify efforts to weed out “colorum” vehicles—public utility vehicles that ply routes without the required franchises—that have taken away market share from legitimate jeepneys.