US lawmaker lambasts envoy to Vietnam 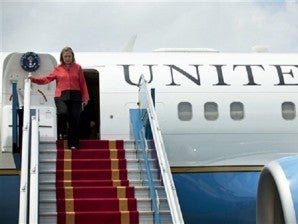 US Secretary of State Hillary Rodham Clinton arrives at Noi Baui International Airport Tueday, July 10, 2012 in Hanoi, Vietnam. A US lawmaker has demanded the removal of his country's envoy to Vietnam ahead of a visit by Clinton, accusing the ambassador of failing to press for human rights. AP/BRENDAN SMIALOWSKI, POOL

WASHINGTON—A US lawmaker has demanded the removal of his country’s envoy to Vietnam ahead of a visit by Secretary of State Hillary Clinton, accusing the ambassador of failing to press for human rights.

Representative Frank Wolf, a Republican known for outspoken views on human rights, said Monday that Ambassador David Shear had promised him he would invite activists, bloggers and religious figures to the embassy’s July 4 party.

Wolf said he later called Shear to ask why he did not invite prominent activists to the Independence Day reception and “his response was appalling.”

“He said that he had invited a few civil society activists but then said that he needed to maintain a ‘balance,’” Wolf wrote in a letter to President Barack Obama.

“America must be a voice for the voiceless. The US embassy in Vietnam must be an island of freedom, headed by a bold American ambassador. Ambassador Shear is not that man,” Wolf said.

State Department spokeswoman Victoria Nuland defended Shear, saying that he has engaged with a “wide spectrum” of Vietnamese, including democracy activists and religious leaders, and invited “representatives of these groups” to the July 4 reception.

“Since arriving in Hanoi in August, Ambassador Shear has put human rights at the center of our bilateral engagement with Vietnam. At every meeting with senior Vietnamese officials he has raised human rights issues,” she said.

Shear is a veteran US policymaker on Asia. Lawmakers do not have the power to directly remove ambassadors, who are appointed by the president and approved by the Senate.

Wolf also accused Shear of showing “little urgency” in seeking the release of Nguyen Quoc Quan, a US citizen arrested on arrival in Vietnam on April 17.

Nguyen is a member of Viet Tan, or the Vietnam Reform Party, an opposition group banned by Hanoi.

In a separate letter to Clinton, 12 members of the House of Representatives across party lines urged her on her visit to “press for his immediate and unconditional release.”

Obama, like his predecessor George W. Bush, has pursued warmer ties with Vietnam despite Washington’s war memories and concerns over human rights.

Clinton is expected to hold talks Tuesday in Hanoi on greater cooperation with Vietnam, which has been seeking to improve relations with the United States amid tensions with historic rival China over territorial disputes.

Human Rights Watch in a statement called on Clinton to press Vietnam to ease its tight restrictions on the Internet and to release the more than a dozen bloggers imprisoned after voicing their opinions online.