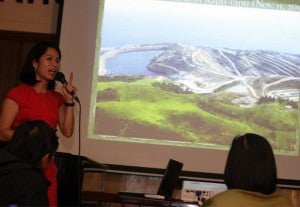 Ardent antimining advocate Gina Lopez cheered President Benigno Aquino for making a stand to protect the environment by explicitly identifying in Executive Order No. 79 the areas banned from mining.

However, Lopez said the President must address how existing mining contracts not affected by the order would be treated “especially if they ran smack in the middle of a tourism area or agricultural land.”

“Whose interests will prevail—the miners or the farmers?” asked Lopez in a phone interview.

Environment Secretary Ramon Paje said there were no existing mining operations in the 78 tourism areas although there were applications.

Antimining activists, particularly in Palawan and Romblon provinces, and an alliance of mining-affected communities and civil society organizations covering 30 provinces in the country welcomed the EO “with some reservations.”

Even Albay Governor Joey Salceda, who earlier warned that 40 governors would go to court to question the much-awaited EO, said “the final shape and complexion of the mining EO has taken a very constructive approach toward the LGU’s (local government unit’s) role.”

He said the EO hardly had a trace of the erstwhile adversarial tone of the draft.

Salceda said the EO showed the President had explored “the outer boundary of executive discretion” but noted that the limits imposed by laws, especially Republic Act No. 7942, preempted the kind of reforms that could make him change his position against mining per se. “The EO is good but mining is bad,” he said.

While the new policy guidelines stated that there would be no new mining permits to be granted “in island ecosystems” until a law amending the Mining Act was in place, the Palawan NGO Network Inc. (PNNI) urged Malacañang to clarify the order pertaining to applications of large-scale mining firms in Palawan.

The PNNI, along with other antimining groups, is seeking a complete mining ban in Palawan, citing its delicate ecosystems and biodiversity.

“There is a gray area in the guidelines pertaining to existing applications of large-scale mining companies in southern Palawan, Elizabeth Maclang of PNNI said.

She said PNNI would like the EO to categorically state Palawan’s closure to mining, in consonance with the order’s stated policy to exempt important island ecosystems.

The EO, the PNNI said, was not clear on mining companies which were previously awarded MPSAs and similar legal concessions by the DENR.

Antimining advocates in provinces, particularly the Alyansa Tigil Mina (ATM) challenged the effectiveness of the EO to address environment degradation.

Rodney Galicha, coordinator of the ATM, said the provisions in the new mining policy failed to address issues concerning environment degradation, human rights and protection of indigenous peoples’ rights as the new policy would only cover new mining applications.

In Romblon, Ronelio Fabriquer, a bishop of the Philippine Independent Church and convenor of the Romblon Ecumenical Forum Against Mining, said the new policy would weaken existing local ordinances.

Romblon, for instance, has been implementing its own indefinite ban on all forms of metallic mining and declared the entire province a mining-free zone.

John Heredia, spokesperson of the Capiz Environmental Protection Alliance, also feared that the EO could lead to the revocation of ordinances passed by towns and provinces against mining.

“There is a provincial ban on large-scale mining in Capiz but there is none at the national level. Does this mean that the province has to revoke the ordinance?” Heredia said.

The Capiz provincial board passed an ordinance  which imposed a 50-year moratorium on large-scale mining in the province. The ordinance was considered the first of its kind in the country.

Eleven provinces have passed ordinances declaring a moratorium on large-scale mining. These include the provinces of Capiz, Guimaras, Negros Occidental, Samar, Eastern Samar and Northern Samar.

Guimaras Gov. Felipe Nava who is on an official trip abroad said officials of the province would study the implications of the order on an ordinance banning large-scale mining in the island-province.

Danilo Lagos, who chairs the Save Isla Homonhon Movement, said the EO would not solve the group’s campaign against mining.

“We are strictly opposing any mining operations, particularly on Homonhon Island. That executive order also allows mining activities. To us, it is no different from any law allowing mining activity like that of the Mining Act of 1995,” Lagos said.

His group has been opposing the exploration for nickel by Emir Resources Corp. on Homonhon Island, off Guiuan, Eastern Samar, because its mining claim includes the only secondary school on the island, farmlands and the island’s source of potable water.

Ifugao Representative Teodoro Baguilat Jr., chairman of the House committee on national cultural communities, welcomed the EO  because it identified indigenous Filipinos as a stakeholder in the mining sector.

But Beverly Longid, president of the party-list group Katribu, said the directive offered “no considerations for IP (indigenous people’s) rights,” when the President’s order asserted national laws over local measures that ban open-pit mines or which define their territory’s environmental code.

Longid said that aside from specific provisions benefiting IPs, many of these local laws shield IP communities from the impact of large-scale mining.