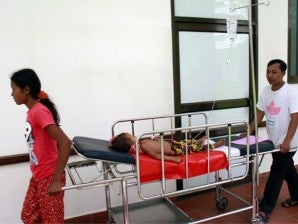 This photo taken on July 5, 2012 shows a Cambodian woman (L) pulling a child on a gurney at Kantha Bopha children's hospital in Phnom Penh. Medical experts are scrambling to respond to what the Cambodian health ministry and World Health Organization (WHO) have labelled an "undiagnosed syndrome" that has claimed the lives of at least 56 boys and girls, mostly toddlers, since April. AFP / KHEM SOVANNARA

PHNOM PENH – Health experts working to identify an illness that has killed dozens of children in Cambodia found a link to a virus that causes hand, foot and mouth disease, the UN health agency said Monday.

At least 52 children aged three months to 11 years have died from the undiagnosed syndrome since mid-April, out of 59 cases, the World Health Organization (WHO) and the Cambodian health ministry said, updating the toll.

Recent laboratory results showed “a significant proportion of the samples tested positive for Enterovirus 71 (EV-71)”, which causes a lethal strain of hand, foot and mouth disease, the joint statement said.

EV-71 is common in Asia, but Nima Asgari, a public health specialist for the WHO in Cambodia, told AFP he believed it had not been seen in this country before.

Asgari said identification of the strain was an important first step but stressed more tests were needed to learn if the deceased children also suffered from other viruses.

“It’s a significant finding,” he said. “It demystifies quite a lot the situation.”

Mystery surrounding the disease – which has symptoms including high fever, followed by rapid deterioration of respiratory functions – and its high fatality rate among young children, has caused concern among Cambodians.

Paediatrician Beat Richner, founder of the country’s charitable Kantha Bopha children hospitals where a majority of the patients were treated, has given a higher death toll of 64 victims, with just two children surviving.

Richner, who was the first to ring the alarm about the disease, said 15 out of 24 patients had tested positive for EV-71, but that this wasn’t the end of the story.

“We have now to see what really is causing the deadly pulmonary complication and see if a toxic factor is playing a role too,” he said in an email to the media on Sunday.

Health Minister Mam Bunheng said an investigation into the illness was ongoing.

Hand, foot and mouth disease is contagious and spreads through direct contact with the bodily fluids or faeces of an infected person. The best way to prevent the disease is through good hygiene, Asgari said.