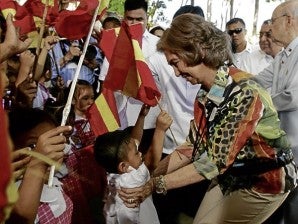 A SOFT SPOT FOR CHILDREN Queen Sofia of Spain reaches out to children of members of an urban poor group in Zamboanga City who expected to see a queen wearing a crown and got a pleasant surprise when they saw “an ordinary person” whose only difference with the city’s poor was that she was “white.” CONTRIBUTED PHOTO

ZAMBOANGA CITY—When told that members of a poor community here would get to see a real queen, 8-year-old Jenny Asurin immediately thought of a woman in a gown and wearing a crown.

Waiting in a multipurpose hall where beneficiaries of a Spanish aid agency’s were gathered to greet Queen Sofia, Jenny expressed surprise at what she saw.

A tall woman, wearing a printed blouse and light brown slacks, emerged from a heavily tinted vehicle and casually entered the hall to be met by two toddlers who offered her a bouquet of flowers.

“Is that the queen?” Jenny asked her 39-year-old mother, Geraldine, whose nod didn’t satisfy her  child’s search for answers.

“Where’s her crown? Why isn’t she wearing a gown?” Jenny continued to ask soon after Queen Sofia smiled at her and briefly touched her face.

Jenny, like many others in the urban poor group Kalinaw Homeowners Association (KHA), had associated royalty with images they see on TV.

Laundry woman Arsenia Cabigting, 42, said when she rushed to Kalinaw Community Hall to see the queen, she was expecting images of kings and queens that she sees on TV to come to life.

“I was expecting a queen that we see on TV. She looks like an ordinary person, like us, only that she is white,” Cabigting told the Inquirer.

Juanita Cabugatan, head of KHA and of another urban poor group called Pakasa, said Queen Sofia turned out to be “down-to-earth.”

“We didn’t expect that someone like her would come down and mingle with us,” said Cabugatan, whose groups were among the beneficiaries of Manos Unidas, a Spanish nongovernment organization that implements aid programs of the Spanish government.

Clara Pardo, who handles projects in Asia of Manos Unidas, said Queen Sofia was in the city to see the projects that the Spanish government, through Manos Unidas, had helped build.

“She likes to see where the money went and was spent, and she is very committed to development projects,” Pardo said in an interview with the Inquirer.

“Queen Sofia also wants to meet and interact with children and women because she is always very worried about the situation of children in the world,” she added.

A DOWN-TO-EARTH queen takes children of the poor in Zamboanga City in her arms for a souvenir picture. CONTRIBUTED PHOTO

Fr. Angel Calvo, of the Claretian Missionary, who heads Zamboanga-Basilan Integrated Development Alliance Inc. (Zabida), said the Spanish government has been helping his group for 13 years now and has so far poured in about 5 million euros into projects launched by Zabida, another group that helps the poor in Zamboanga and Basilan through livelihood and other projects.

“It’s not a state visit. She was even scheduled to meet the homeless and street children, but according to authorities from Malacañang and local government officials, there were security issues,” Calvo said.

Queen Sofia was supposed to visit an orphanage in the city, Akay Kalinga, but this was canceled supposedly for security reasons.

Akay Kalinga is located on RT Lim Boulevard, where the city jail and the police’s Camp Batalla are.

The security arrangement that Malacañang officials prepared for Queen Sofia’s visit in the city apparently made the queen “a little bit upset,” said Calvo.

Prior to her arrival at another poor community called Katilingban Para sa Panaghiusa, also in a poor village in the city, an organizer announced inside the chapel that only “direct beneficiaries are allowed to meet with the queen of Spain.”

The unidentified organizer announced the rules:

“No hand shaking, no unnecessary noise, taking of pictures is not allowed inside the chapel, clapping of hands is allowed if there’s a signal for you to clap your hands.”

Calvo explained that the rules did not come from them.

“The activity was supposed to be open to everyone. There’s a program prepared for the queen, but somehow, the program was altered in Malacañang and several activities were scrapped. I know the queen was a bit upset,” Calvo said.

Calvo said he was even tempted to remove the rope that cordoned off people from the queen.

“The queen of Spain is not like that. She really wants to be with the people. Did you see how she interacted and mingled with (poor) families?” said Calvo.

“She was hoping the same thing will happen to other communities, but we can no longer control the situation since it’s the Malacañang security people who prepared the protocol of the programs,” the priest added.

Queen Sofia was in the Philippines for a five-day visit that officials hailed as an affirmation of friendship and cooperation between the two countries more than 300 years after the Philippines became one of Spain’s colonies.

The Spanish queen came to see for herself the different projects that her government is helping implement in the Philippines and elsewhere to help uplift the lives of people in some of the world’s most destitute areas.

The visit is seen as a gesture of commitment to continue supporting aid for the poor from the Spanish government, which itself is suffering from economic difficulties common among many European countries today.