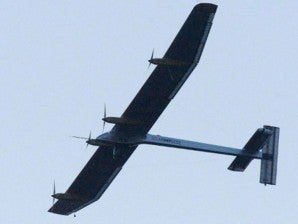 The Swiss-made solar-powered plane, Solar Impulse piloted by Bertrand Piccard, takes off from Rabat airport on July 6, 2012. The experimental solar-powered aircraft left for Madrid on its return journey to its home port in Switzerland, Morocco's news agency MAP reported. The flights are intended as a rehearsal for the goal of a round-the-world trip in 2014 by an updated version of the plane. AFP/ABDELHAK SENNA

MADRID – A solar-powered plane landed in Spain Saturday on its way back home after breaking a record with the first intercontinental flight by an aircraft run on the sun’s energy, organizers said.

Swiss adventurer Bertrand Piccard, 54, piloted the experimental plane Solar Impulse on the 17-hour flight from Rabat in Morocco and landed at Madrid’s main airport overnight early on Saturday, his team said in a statement.

The Solar Impulse, which is made of carbon fibre and flies without fuel, is on its way back to Switzerland after last month flying from Spain to Morocco, the first time a solar-powered aircraft has crossed continents.

The flights are a rehearsal for an attempted round-the-world trip in 2014 by an updated version of the plane.

The 900-kilometer (560-mile) Morocco to Spain leg was “a particularly tactically challenging flight” at an average of 60 kilometres an hour, with the plane hitting strong crosswinds, the team said in a statement.

“The aircraft’s technology has once again proven its reliability and its energy-saving efficiency,” Solar Impulse co-founder Andre Borschberg said in the statement.

“This flight has taught us even more about the aircraft, allowing us to fly through winds superior to the speed of the airplane.”

The statement said the plane would stay in Spain for “a few days” of official and sponsorship events before heading for Switzerland.