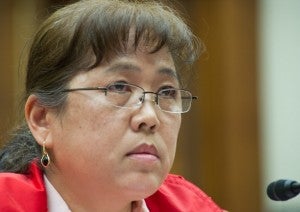 Mei Shunping, a victim of forced abortion, testifies before the US House Foreign Affairs Committee, Africa, Global Health, and Human Rights Subcommittee hearing on "Chen Guangcheng: His Case, Cause, Family, and Those Who are Helping Him," May 15, 2012 on Capitol Hill In Washington, DC. In a resolution, the European Parliament said Thursday, July 5, 2012, it "strongly condemns" the " practice of forced abortions globally and especially in the context of the one-child policy. AFP PHOTO/KAREN BLEIER

STRASBOURG—China’s one-child policy has given rise to unacceptable forced abortions, European MPs said Thursday, condemning the case last month of a mother forced to abort late into her pregnancy.

In a resolution, the European Parliament said it “strongly condemns” both the case and “the practice of forced abortions globally and especially in the context of the one-child policy.”

Abortions in China are illegal beyond six months but, as a result of strict population control that favors baby boys, sex-selective abortions are widespread.

The practice has “created an imbalance between the numbers of men and women, negatively impacting all of Chinese society,” the parliament said.

In June, authorities in northern China’s Shaanxi province forced 27-year-old Feng Jianmei to terminate her pregnancy at seven months because she could not pay a 40,000 yuan ($6,300) fine for exceeding the population control policy.

A picture posted on the Internet of Feng lying on a hospital bed with her blood-smeared foetus next to her sparked outrage in China and around the world.

Seven officials have since been given “administrative sanctions.”

European MPs called for an independent inquiry into infanticide and forced abortions in China.

The one-child policy came into force in the late 1970s to limit explosive population growth. Today, China is the world’s most populous nation – home to nearly 1.35 billion people.