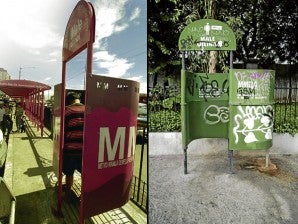 THEN AND NOW Rosy pink when introduced in 2003 (left), the MMDA urinal has turned green and endures as an odd, often unsightly fixture on Metro Manila sidewalks. (photo by ARNOLD ALMACEN)

They do leave a stink.

Some P12 million worth of “pink urinals,” a project of then Metropolitan Manila Development Authority Chair Bayani “BF” Fernando, have rusted away at an MMDA compound in Pasig City, according to the Commission on Audit (COA).

The remaining 563 units, worth P12.18 million, were improperly stored, dilapidated and “exposed to the elements,” the agency noted.

This “defeated the objective of the program and resulted in wastage of government funds,” it added.

The project drew mixed reactions when introduced by Fernando. Many male motorists and commuters did find them useful, but critics saw an unsightly and grossly unsanitary booth that only encouraged men to relieve themselves in public.

Reached for comment, MMDA General Manager Corazon Jimenez said the agency under the Aquino administration did not scrap the project and had actually installed a number of urinals since COA made the report.

“COA called our attention to this issue, so we have conducted our own audit of these urinals. As of May this year, we only have 342 urinals waiting to be installed, and these are stored at our base in Ortigas, Pasig. All of them are still in good condition,” Jimenez told the Inquirer.

She said the MMDA had already installed some of the urinals based on the policy of the current chair, Francis Tolentino, to have them set up primarily in public markets or transport terminals.

As much as possible, the agency will not install urinals on major thoroughfares or any location where they may be openly seen by the public, Jimenez added.

“We observed that the uninstalled urinals were stockpiled in the open area in Base 108, Ultra, Pasig City,”  COA said, noting that MMDA officials then apparently found no urgency to set them up in their designated locations after making mass procurements.

Out of the 14 local government units in Metro Manila listed as requiring the installation of urinals, the cities of Quezon, Valenzuela, Malabon, Mandaluyong, Marikina, Makati, Pasig, Taguig, Parañaque and the municipality of Pateros “were shown to be short of the required units,” it said.

“Likewise, the purpose of procuring such urinals was not satisfactorily achieved as manifested by the foul smell coming from most of the urinals installed,” it added.