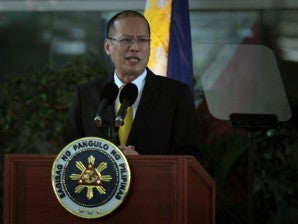 Two years after the previous administration was forced to import more than 2 million metric tons of rice to fill a shortage, President Aquino on Thursday declared the Philippines on the road to self-sufficiency in the staple and thus no longer needing to import the grain by next year.

Addressing the audience at the launch of the Department of Agriculture’s (DA) Food Staples Sufficiency Program, Aquino cited the DA’s irrigation program and the use of certified seeds as key to the country’s march toward self-sufficiency in rice production.

“When we started our task we thought, ‘How could we solve the problem of food security?’ After two years, we filled just one-third of the shortage that we inherited [each year] and next year we will no longer have to fill any shortage because we would already have enough,” the President said.

Aquino said that when he assumed the presidency in 2010, he learned the rice shortage was 1.3 million MT annually. He said that by his second year in office, this had gone down by 65 percent to 850,000 MT.

“In fact, according to [Agriculture] Secretary [Proceso] Alcala, we’ll no longer import rice next year because we would already be self-sufficient. So please help Secretary Alcala with his promise to our countrymen,” said the President to the agriculture stakeholders in attendance.

“If we’ll be fortunate and not be quite affected by storms, it looks like that when 2013 comes, we’ll not only be self-sufficient, we ourselves will be exporting rice,” he said, drawing applause.

Aquino said that if the unmilled rice wasted due to postharvest losses could be limited to 6 percent, this could add 650,000 MT to storehouses.

The President recalled the time the Arroyo administration imported 2.47 million MT of rice to fill a shortage of 1.3 million MT.

The President cited Alcala not just for the self-sufficiency in rice but for other food products as well.

“Through the Food Staples Sufficiency Program, it is said that it wouldn’t take long before we’ll also no longer have to import other products like corn, cassava, even other fruits and vegetables. Truly we are impressed with Secretary Procy and everyone in the Department of Agriculture,” Aquino said.

He said the standing crop for the second quarter appeared to be robust and would compensate for the slight dip in the first quarter output.

“We will be able to break the record harvest of the first semester last year,” Alcala said in a media interview after he presented the DA’s Food Staples Sufficiency Program policy to President Aquino.

Alcala said the country was on the “right track” to attaining rice self-sufficiency and halting the expensive importation program by 2013.

Assistant Agriculture Secretary Dante Delima, head of the National Rice Program, attributed the boost in yield to the advanced cropping season, which was adjusted to April from June, and to new and rehabilitated irrigated lands.