JBC issue must be settled first before appointing new CJ—Chavez 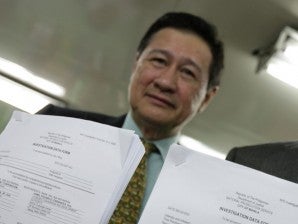 To avoid complications, the Supreme Court should resolve questions on the constitutionality of the composition of the Judicial and Bar Council (JBC) before a new Chief Justice is appointed, former Solicitor-General Francisco Chavez said Wednesday.

“Until that issue is resolved, the actuation of the JBC is questionable. The sooner the issue is resolved by the Supreme Court, the better,” Chavez told reporters after accompanying a client file a case at the Office of the Ombudsman in Quezon City.

Chavez had questioned the constitutionality of JBC’s composition, saying the Constitution gives Congress one vote in the screening body. Currently there are two congressional representatives—one senator and one House representative.

Unless the issue is resolved before President Benigno Aquino appoints a new Chief Justice to replace impeached Renato Corona, the selection process of the JBC would always be “tainted with unconstitutionality,” he said.

Chavez had petitioned the high court to freeze the JBC screening process for the 24th Chief Justice, arguing that its current practice of allowing both representatives of the Senate and the House of Representatives to take part in its proceedings was “patently unconstitutional.”  He said Section 8, Article VIII of the Constitution provides only “one representative from the Congress” should join the council as ex-officio member.

Chavez, one of the 71 nominees for the post, said the high court should set a deadline for the resolution of his petition.

The JBC on Wednesday set the public interviews for the 24 aspirants from July 24 to 26.

Lawyer Jose Mejia, a regular JBC member representing the academe, said the council expects to subject at least six nominees per day to the panel interviews, which would be open to live media coverage for the first time.

“I think it’s a good indication, if it’s nonextendible in nature, that the Supreme Court considers the resolution of this issue urgent, that’s why it gave the respondents up to Monday,” he said, reacting to SC’s orders to the JBC, Iloilo Representative Niel Tupas Jr., Senator Francis Escudero and the Office of the Solicitor General to comment on his petition.

He hoped that the comments on his petition would be sufficient for the high tribunal to decide on the case. “But if it wants to call the case on oral arguments, it will be my pleasure,” he said.

Chavez said he had neither accepted nor rejected the nomination precisely because of the unconstitutionality of the JBC’s composition.

“I just filed a petition before the Supreme Court because I cannot subject myself to the jurisdiction and proceedings of a body whose composition is unconstitutional. Even if I rejected the nomination in the form that JBC wants it, then such action on my part would be validating an error,” he said. With a report from Marlon Ramos