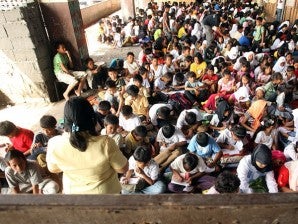 Because of this, Ibrahim said, Mayor Japal Guiani Jr. has asked village heads to monitor the water level in their villages.

“If the situation back home is favorable, the city government will send them home,” she said.

Almost all of the city’s 37 barangays were inundated when the Rio Grande de Mindanao overflowed last month. The swelling of the river was blamed on large amounts of water hyacinths blocking the flow of water to the sea.

Guiani said the city government would not force the evacuees to return to their homes if their villages are still flooded. But if the affected villages are already livable, the families should return home, he added.

Guiani said the city government can assure that assistance would continue even if the evacuees have gone home.

He said the city social welfare office was preparing five-day food packages for every family that will return home and leave the evacuation center.