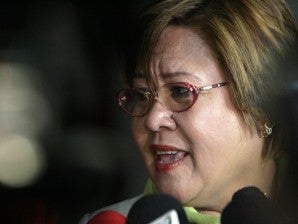 De Lima also stood firm on her decision to undergo screening of the Judicial and Bar Council (JBC) for the coveted post.

Rejecting the call of House Majority Leader Neptali Gonzales II for her and acting Chief Justice Antonio Carpio to withdraw, she said it was her “individual decision” to accept her nomination as top magistrate.

“I was able to prove my independence when I (headed) an independent constitutional body and I can do that again,” De Lima told reporters, referring to her stint as chair of the Commission on Human Rights from 2008 to 2010.

De Lima maintained that an individual’s capacity to keep his or her principles “is on the character of the person.”

She also clarified that she was not being presumptuous about her chances of becoming the country’s first female Chief Justice.

“I’m just offering myself as an alternative to the insiders (and) to the other contenders,” she said. “Let’s just see if the JBC would consider me as fit enough for that post and if short-listed, if the President would also think that I’m worthy of that post.”

Deputy presidential spokesperson Abigail Valte on Tuesday insisted there had been no change in the President’s preference that De Lima remain in her current post.

Lipa Archbishop Ramon Arguelles claimed that De Lima’s aspiring for the post bolstered suspicions that the judiciary had lost its independence.

“The whole thing is in bad taste,” the outspoken Arguelles said, adding that Corona’s impeachment left the judiciary vulnerable to Malacañang’s machinations. “I don’t think (the judiciary) will be free, whoever will be the Chief Justice.”

On Tuesday, Albay Representative Edcel Lagman added his voice to those opposing the nomination of De Lima and Carpio.

“What were perceived as the negative factors which rooted out Corona must be the same factors which must weed out potential errant nominees,” Lagman said.

“The standards of not being beholden to the appointing power, impartiality, credibility and independence must constitute the same inflexible yardstick by which the President ought to measure the next Chief Justice,” he added.

Lagman said the President should cross out “any nominee who participated in the trial of Corona either as prosecutor, judge or witness, or one who is perceived to have coveted the position of chief magistrate.”

De Lima was a prosecution witness in Corona’s impeachment trial, while Carpio was accused by Corona of lusting after his post.

Lagman said the public who followed the Corona trial would be eager to know the President’s choice since he rallied his allies in the House of Representatives to impeach Corona and he was vocal in lobbying for his conviction in the Senate.

“The buck stops with (Aquino) as the appointing authority,” Lagman said. With reports from Norman Bordadora and Gil C. Cabacungan