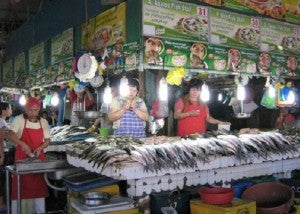 The Department of Agriculture-Bureau of Fisheries and Aquatic Resources on Monday said it was finalizing an order that would ensure a more transparent and wider importation of various fish species to the Philippines.

“We are hoping to finish it by the end of the year,” BFAR Director Asis Perez told reporters Monday.

The BFAR had said it was compelled to open the domestic market to imported fish because of declining fish catch in the country.

The national stock assessment program of the bureau showed that 10 of the 13 fishing grounds that were mapped are “very heavily exploited.” These areas have more than 70 fishermen per square kilometer.

In the last two years, the fisheries subsector has been recording declining catches. In 2011, it recorded a 4-percent drop to 4.98 million metric tons after conservation measures were implemented to enable exploited fishing grounds to recover.

Fish accounts for 80 percent of the animal protein intake of Filipinos, each of whom eats 32 kilos of fish and other marine products annually.

Because the Philippines is struggling to meet its population’s growing demand for fish, the government is keen on regulating fish importation, Perez said.

The BFAR is discussing the proposed order with various stakeholders.

Perez said they had encountered “huge resistance” from companies over the documentation of their fish imports.

The BFAR chief noted that fish such as sardines, salmon, pangasius and mackerel were already being imported by food processing companies.

However, there were also instances of fish smuggling. But Perez said they could not give figures on smuggled fish.

These smuggled products are usually cheap and consist of common fish species such as galunggong and sardines, which come from China and Taiwan.

Perez said these end up in public wet markets and compete with the catch of local fishermen, who are mostly marginal fishers.

Perez said the new order would address this as it would make fish importation more transparent and provide the government with more revenue from taxes.

“This proposed regulation says that if you want to import fish for sale in the wet market, we should know about it,” Perez said.

The BFAR director said they would follow similar rules on importation set by the National Food Authority, which oversees rice and corn importation.

Perez said the BFAR would determine the demand for a given year and the catch projection. The difference between the two figures would be the basis for the fish import quota, he said.