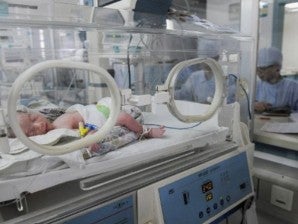 One of baby twin girls born to a sixty-year-old Chinese woman, only referred to by her pseudonym Cheng Lin, undergoes treatment at a hospital in Hefei, east China's Anhui province on May 25, 2010. Cheng received in vitro fertilization after losing her daughter Tingting, who died in a gas poisoning accident in 2009, making her the oldest woman to give birth in the Asian nation. AFP

PARIS – In-vitro fertilization (IVF) has given the world about five million new people since the first test tube baby was born in England 34 years ago, according to an estimate released on Monday.

As the initial controversy over man’s scientific manipulation of nature has faded, about 350,000 babies conceived in petri dishes are now born every year, said the European Society of Human Reproduction and Embryology (ESHRE).

That represents about 0.3 percent of the 130-million-odd babies added to the world population annually.

“Millions of families with children have been created, thereby reducing the burden of infertility,” said David Adamson, chairman of the International Committee for Monitoring Assisted Reproductive Technologies (ICMART).

IVF, which involves placing an egg and sperm together in a petri dish for conception, and a sub-category known as ICSI (intracytoplasmic sperm injection) where the sperm is inserted with a micro-needle directly into the egg, have become commonplace.

But it has proven controversial over the years, with some fearing it paved the way for so-called designer babies whose characteristics are chosen by parents.

The Vatican considers it immoral because of the wastage of a large number of embryos, and the procedure has been criticised for allowing women to have children until a much older age.

The five million milestone “justifies all the legal and moral battles, the ethical debates and hard-fought social approval,” said Simon Fishel, a member of the team that helped conceive the world’s first IVF baby, Louise Brown, born in 1978.

The birth estimate was done by ICMART for the 28th annual meeting of ESHRE which opened in Istanbul, Turkey, on Sunday.

It was based on the number of IVF and ICSI treatments recorded worldwide up to 2008, and estimates for the years thereafter for which confirmed figures are not yet available.

The data showed that about 1.5 million IVF and ICSI treatments are now administered around the world every year – more than a third of them in Europe.

Success rates have stabilised, with about a third of fertilised embryos implanted resulting in a live birth.

ESHRE said there was a trend in Europe to implant fewer embryos at a time, causing a drop in multiple births which carry a higher risk of complications for the mother, a lower baby birth weight, and developmental difficulties.

The number of triplets has fallen below one percent, said the statement, “and for the first time, the twin delivery rate was below 20 percent.”