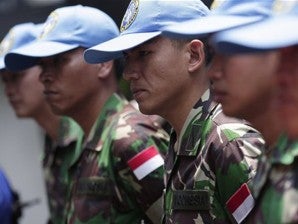 Indonesian army soldiers stand in a line during welcome ceremonies at the Indonesian Embassy in Makati City on Sunday, July 1, 2012, prior to their deployment as truce monitors in the southern Philippines. The 10 Indonesian army personnel and 5 civilian experts arrived in the Philippines to join a Malaysia-led international contingent safeguarding a ceasefire between Philippine troops and the country’s largest Muslim rebel group in the volatile south. AP PHOTO/AARON FAVILA

MANILA, Philippines— The Philippine government and the country’s largest Muslim rebel group say they are optimistic they can forge a peace agreement this year despite differences over how to peacefully settle the decades-long insurrection.

Presidential Peace Adviser Teresita Deles said Sunday government negotiators and the 11,000-strong Moro Islamic Liberation Front were taking steps to resolve key differences, including the extent of power to be given to a Muslim autonomous region in the south.

Interviewed at the Indonesian Embassy in Makati City, where she welcomed the 15-member Jakarta contingent to the peace talks’ international monitoring team (IMT), Deles said that they have been “working on that,” (referring to a peace pact by yearend).

He says the Indonesian truce monitors can help create an atmosphere conducive to peace talks.

More good news from Deles. “There has been no outbreak of hostilities (between the two sides) since the start of the year.”

“We are in a very crucial stage of the negotiations, and it is very important at this time the ceasefire will hold,” she emphasized.

Deles expressed hope that “this time, we will have significant moves at the negotiating table that will ensure that work on the ground will be a permanent fixture of peace in the land.”

She cited the participation of the Indonesian delegation to the IMT, saying “it strengthens the civilian component of the IMT and also signifies that we’ll look at the peace process not just at the security element but at the other elements as well, like human rights and international humanitarian law, that we hope will bring us lasting peace.”

“We are taking strength in pushing with the peace process knowing that there are friends like Indonesia who are always at our side, heeding our call for assistance and support,” she said.

Deles also hoped “it will be a good mission here” for the 10 military and five civilian members of the Indonesian monitoring team.

For his part, Indonesian Ambassador to the Phiilppines Yohannes Kristiarto Soeryo Legowo pointed out that “we always consider the Philippines as a good friend, good neighbor and one of our strong partners in the region.”

“We always need to work together very closely,” he said, stressing “we hope we could really contribute, especially in establishing peace in the southern Philippines,” he said.

He noted, “We will never forget what the Philippines did for Indonesia when we had to deal with the (separatist rebellion in Aceh, located in the northern part of Sumatra province, in the 1990s). The Philippine government sent an international monitoring team to Indonesia.”

According to the envoy, Indonesia “has been actively playing role in the Philippine peace process since 2007 under the framework of the Organization of Islamic Conference, with its duty of reviewing the implementation of the 1996 peace agreement between the Philippine government and the Moro National Liberation Front.”

“The agreement from the government of Indonesia to join the IMT was officially delivered by President Susilo Bambang Yudhoyono during the state visit of President Aquino to Jakarta on March 8, 2011,” said Legowo.

Legowo was scheduled to fly on Monday to Cotabato City to “officially hand over the Indonesian contingent to the IMT mission there,” said the Indonesian embassy.

“The contingent will undergo a debriefing program for about one week in Cotabato City before they are deployed to several sites in Mindanao,” the mission also said.

Besides Indonesia, members of the IMT in the government-MILF peace talks include Malaysia (also with 15 members), Brunei Darussalam (10), Norway (2), the European Union (2), and Japan (one).

But Leonen admitted that the Aquino administration has been keeping its “guarded optimism” over the peace process because the next stage of talks would be more difficult.

He disclosed “the difficult issues are being tackled now, including political settlement, which is not easy to talk about.”

Leonen said Malacañang would like to sign a peace accord that could be implemented within its period of governance.

Deles earlier urged stakeholders in the peace process to study the issues well so they could contribute positively.

She appealed to the public to “ask if there are things that need to be further explained and help in crafting an agreement that is acceptable to the majority.”

Deles cited the importance of citizen participation in the peace process, saying “ordinary citizens should take part in supporting and guarding the peace talks.”—With AP report