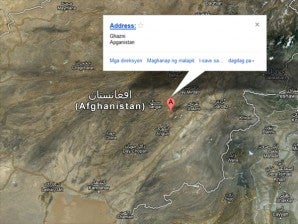 Ghazni, Afghanistan – A Taliban roadside bomb tore through a bus on a highway in militant-plagued southern Afghanistan on Sunday, killing five passengers, including women and children, officials said.

There was no claim of responsibility for the bombing in the province of Ghazni but officials blamed the blast on the “enemies of Afghanistan”, a standard phrase used to refer to the Taliban.

“The bus was travelling from Kabul to Kandahar. Along the road near Ghazni city it struck a roadside bomb. Five people were killed and 11 others were injured,” provincial police chief Zarawar Zahid told AFP.

Baz Mohammad Hemat, a doctor in the local hospital, confirmed the casualties.

Improvised bombs planted on Afghan roads are a common insurgent tactic but they frequently miss their intended target – Afghan and NATO troops – and kill civilians instead.

The Taliban are waging an insurgency to oust President Hamid Karzai, the US-backed Afghan leader from government. The Kabul government is assisted by tens of thousands of US-led NATO troops deployed in the war-torn country since the Taliban regime was toppled in late 2001.