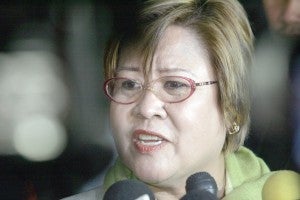 Justice Secretary Leila de Lima on Sunday made a pilgrimage to the miraculous Our Lady of Manaoag Shrine in Pangasinan to seek divine intercession before she announced that she wished to become Chief Justice.

On the eve of the final day for accepting nominations for the post vacated by Renato Corona, whom she helped oust as a witness for the prosecution in his impeachment trial, De Lima said she wanted to seek guidance on what she said could be a life-altering decision.

Now, the woman, who defied a Supreme Court order that would have allowed former President and  Pampanga Representative Gloria Macapagal-Arroyo to leave the country before a warrant could be issued for her arrest in December last year, said she was prepared to take a shot at the country’s highest judicial office.

“After a deeper reflection and further consultations with my family and close confidants, and amidst my initial hesitance and apprehensions, I now feel that I will be up to the challenge and will now take on the challenge,” De Lima, 52, said in a text message.

“I’ll be honored to submit myself to the scrutiny of my peers at the JBC (Judicial and Bar Council) and the general public, for eventual consideration of the President,” she said.

As justice secretary, De Lima sits in the JBC—the body created by the Constitution to screen applicants for the top judicial posts—as one of four ex-officio members.

Another JBC ex-officio member, acting Chief Justice Antonio Carpio, has also signified his intention to join the selection process for the 24th Chief Justice of the Philippines.

Both De Lima and Carpio said they would inhibit themselves from the JBC’s selection of the new Chief Justice.

De Lima said she decided to accept her nomination after she met with President Benigno Aquino on Friday. She said the President told her that “he will respect my decision to accept my nomination.”

In previous interviews, De Lima said she was having second thoughts about the job.

To firm up her decision, De Lima said she went on Sunday to Our Lady of Manaoag Shrine where she said she “prayed hard and sought further enlightenment and blessing.”

“I always do that whenever I need to make crucial decisions and confronted with major challenges. Mama Mary is my constant source of guiding light,” she said.

If appointed by the President, De Lima would be the first female Chief Justice of the Philippines.

Following the controversies generated by Corona’s removal from office last month, De Lima said “what the judiciary needs is an effective and trusted leader capable of transforming the institution into a citadel of hope.”

“That, to me, is the call of the times,” she said. “I sincerely believe that, at the minimum, I have my character and resolve as a person, and my track record and passion as a public servant, to offer for such a crucial and revered post.”

Touted as among the heavyweight contenders for the position, De Lima earned her law degree from San Beda University in 1985 and placed eighth in the bar examinations that year.

The eldest daughter of former Election Commissioner Vicente de Lima, the justice secretary was an election lawyer before she was appointed by Arroyo as chairperson of the Commission on Human Rights in 2008.

As of Friday, the JBC had received 67 recommendations and applications for the Chief Justice position.

But only 14 of the nominees had officially signified their intention to join the JBC selection process, which would be open to live media coverage for the first time.

Read Next
Government urged to use contraceptive funds to solve child labor woes
EDITORS' PICK
EDITORIAL: To a bike-friendly future
The Best Tech Gifts For The 2022 Holidays
Is it safe to talk politics again at family gatherings? ‘The Reconciliation Dinner’ shows us what that’s like
House energy committee chair Arroyo bats for cheap electricity
vivo’s coming to town to grant wishes with more holiday promos
Pagasa: Warm, sunny Sunday in most parts of PH
MOST READ
LOOK: Vhong Navarro transferred to BJMP detention facility in Taguig
The Elephant Man in the Senate
Posh village as ‘shabu’ haven
LOOK: Zanjoe Marudo bonds with Ria Atayde, her family
Don't miss out on the latest news and information.