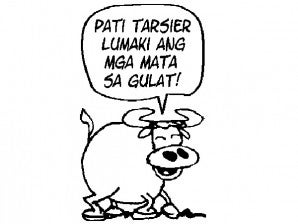 Newly born tarsiers were found in a small patch of secondary forest on Mt. Matutum in South Cotabato giving conservationists hope that there are more of the endangered species in the area that is threatened by logging, farming and mining.

One of the infant tarsiers was with its mother, while the other was alone in the forest, ESI President Pierre Fidenci said in an e-mail to the Inquirer in early June.

With the new discoveries, the number of tarsiers found on Mt. Matutum has reached 26, Fidenci said. He said there could be as many as 50 to 80 tarsiers in the area, making it the largest tarsier population in the country outside of Bohol, where the first tarsier shelter in the country has been established.

Tarsiers have been placed on the red list of threatened species by the International Union for Conservation of Nature and Natural Resources, which says the tarsiers’ forest habitats are being swallowed by logging, mining, agriculture and other economic activities.

ESI said the conservation center would be managed with the B’laan tribe. The group is surveying the proposed sanctuary area, which is about 600 hectares. The sanctuary, which will have nature trails, is expected to be ready later this year.

Fidenci said the tarsiers were being taken care of by the B’laan tribe, which is building a low-impact tarsier sanctuary on Mt. Matutum with the help of ESI.

“The interesting fact is that our research shows the tarsier survived in patches of secondary forest left, and sometimes tiny patches of 10 meters by 20 meters, so cutting down those remaining important ‘islands’ of suitable habitats could lead to rapid extirpation of the Philippine tarsier in Mindanao,” Fidenci said.

ESI is reforesting the degraded parts of Mt. Matutum with indigenous trees as part of its work to preserve the tarsier population in Mindanao.

ESI, which is based in San Francisco, California, has been collecting seedlings of rare and endemic trees from the primary forests of Mt. Matutum for use in the reforestation that will restore biodiversity in the degraded areas.

“Our goal is to continue to harvest seedlings from Mt. Matutum to make our reforestation efforts a real success,” Fidenci said.

Regreening the mountain with local trees is important to the conservation of the tarsier, Fidenci said.

Increasing commercial activities in the mineral-rich and fertile lands of Mt. Matutum could wipe out the tarsier population in the area, said.

“Our data show an urgent need to protect the Philippine tarsier before it is too late,” Fidenci said. “Our reforestation efforts show good progress, with 80-percent survival rate and with some trees [doubling] their height in two months.”

The slopes of Matutum have been deforested and planted to pineapples, coconuts and bananas over the years. The mountain has a forest reserve of 14,000 hectares, but according to data from Birdlife International, only 3,000 hectares comprise primary old-growth forest.

ESI has been training the B’laans to identify and protect tarsiers. They are being taught to detect the presence of tarsiers through the smell of the animals’ feces from a distance. They are also learning to search for individual tarsiers hiding under dense vegetation.

“Our B’laan teams are now becoming experts on surveying for tarsiers, Fidenci said.

Fidenci, who first visited the Philippines in 2001, said B’laans are also being trained to become naturalists.