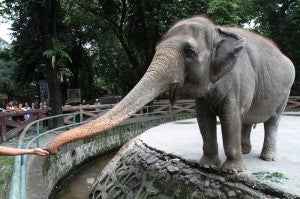 MANILA, Philippines – Lack of elephant friends and foot ailments could prove fatal for Mali, and the only way to address her physical and psychological pains is to transfer her to an elephant sanctuary, Dr. Henry Richardson, a world-renowned elephant veterinarian, revealed.

Mali is the 38-year-old solitary elephant at the Manila Zoo who has been the subject of calls to be transferred to a sanctuary. Richardson published a report based on his visual medical examination of Mali, following President Benigno Aquino III’s directive for experts to evaluate the elephant.

“The lack of a preventative foot-care program is putting Mali in jeopardy of severe foot disease with accompanying pain and suffering,” Richardson said in the report. He added that if those were not properly addressed, they could harbor bacteria and become infected.

In an email interview with INQUIRER.net, Richardson noted that Mali acquired the foot ailments “by living her life to this point on the concrete of the Manila Zoo,” saying Mali should be kept in the wild since elephants have been designed by nature to travel long distances on natural ground.

“In the wild she would be walking on dirt, grass, river sand, bathing in rivers, all conditions which naturally remove the dead skin and debris which has accumulated on her feet,” he said in the interview.

Richardson also detailed in his report how Mali’s enclosure, which consisted of an old original enclosure with a barn and a recent expanded area with a pool, did not fit Mali and prevented her from carrying out normal elephant behaviors.

In the email interview, Richardson also questioned why Mali was not given the proper medical care when all captive elephants must be treated with pedicures.

“All captive elephants need regular pedicures to remove the accumulation of debris mentioned above.  She needs someone who understands the Protected Contact [PC] training method to train her and the zoo staff together.  Then Mali will cooperate in her foot care,” he said.

In his report, Richardson described protected contract training as a type of training that uses “positive rewards, not punishment,” to gain the cooperation of the elephant for foot care and veterinary procedures.”

But Richardson emphasized that he was severely troubled by the psychological stress brought about by Mali’s loneliness, noting that female elephants never leave the families they were born into.

“My major concern is that Mali is alone,” Richardson said in the report. “Mail’s social and psychological needs are being neglected at the Manila Zoo. Even the best intentions….cannot replace these needs, which can only be met by the companionship of other elephants.”

In his report, Richardson noted that Mali’s solitary confinement led to her incessant pacing, an abnormal, neurotic, and self-destructive behavior brought about by the frustrations of captivity and lack of companionship.

Richardson said in the email interview that he was confident that Mali could easily adjust if transferred to a sanctuary, saying his expertise and experience with elephants showed they easily worked out the introductions and sort out their relationship to each other.

He cited the case of Maggie, an elephant who also suffered solitary confinement and health ailments for almost 30 years at the Alaska Zoo. Richardson said that when Maggie was transferred to the Performing Animal Welfare’s Society’s elephant sanctuary in California, she has become a robust elephant, regaining her strength and peace of mind.

“All by giving her the company of other elephants,” he said.

“Move Mali to the sanctuary in Thailand where they have experience with orphaned and lonely elephants,” Richardson said in the interview.

The People for the Ethical Treatment of Animals (PETA) has secured Mali a place at a sanctuary with 14 other elephants in northern Thailand and would pay for expenses related to the transfer of Mali.