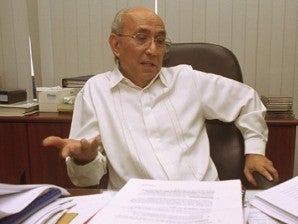 What wrong could there be in allowing a senator and a congressman to participate in the search for the country’s next Chief Justice?

Certainly none, at least in the opinion of one of the framers of the 1987 Constitution.

Constitutionalist Fr. Joaquin Bernas Jr., one of the delegates to the Constitutional Commission which drafted the country’s charter, said the Judicial and Bar Council (JBC) may continue to have eight members even if the Constitution states that it should only have seven.

“(The JBC members should be) seven, but in practice before, we put eight there,” Bernas told reporters late Tuesday.

But he noted that the senator and congressman in the JBC have half a vote each, or they alternated.

Lawyer Francisco Chavez, a former solicitor general, has questioned the current composition of the JBC, the body created by the Constitution to screen applicants to top judicial positions.

In a letter to the JBC, Chavez argued that the Constitution explicitly stipulated that only “a representative of Congress” should be a member of the council.

“When the Constitution uses the phrase ‘a representative of the Congress,’ it is all too clear to require interpretation that there should only be one representative from Congress,” Chavez said in his June 22 letter to the JBC.

Since the JBC was now composed of eight members, Chavez said there could be a stalemate in a vote if half of its members voted against the other half.

“If the Chief Justice, as ex-officio chair, casts his vote on an issue presented before the JBC, then we have the possibility of an impasse because we have an eight-member body. In such a case, who will be the tie-breaker?” he asked.

But Senator Francis  Escudero defended his and Iloilo Representative Niel Tupas Jr.’s membership in the JBC, saying their participation in the selection process for the replacement of ousted Chief Justice Renato Corona was one of their legislative duties.

“The position of the JBC is that unless enjoined by the court in a contrary opinion, the JBC will not change the procedures it had been observing before,” he said.

Escudero also told Chavez to just bring his concern to the Supreme Court, a challenge that the former state lawyer readily accepted.