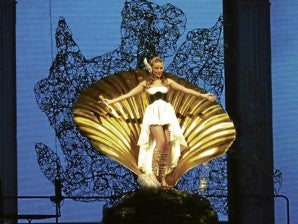 Tickets were very expensive at almost P16,000 apiece for the front rows, and still quite steep at P845 for general admission.

But when Kylie Minogue emerged from a giant seashell on a stage specially designed for her Tuesday night concert at Araneta Coliseum, it seemed that the 10,000-strong audience got their money’s worth.

Taken from her 2010 album’s title and after which her current world tour is named, Aphrodite gave Minogue the opportunity to exploit the elements associated with the Greek goddess: love, beauty, sexuality, the sea and a number of animals.

For more than two hours, Minogue presided over a visually arresting production that opened with videos of perfectly chiseled models swimming underwater to suggest Aphrodite’s world. A supporting cast of dancers and trapeze artists completed the scene.

At 43, Minogue is past her prime. But she appears to know how to play the game in an entertainment scene that generally values image more than substance.

Her queenly postures—highlighted by numerous costume changes—didn’t require her to sweat it out like her dancers. Still, the choreography gave her leeway to perform elegant theatrical steps in sync with the songs’ dance beats.

For a long time critics didn’t take Minogue seriously even as her records sold well in her native Australia and the United Kingdom.

In fact, it was only after the release of her album “Fever” in 2001, that the American market welcomed the TV-actress-turned-disco-doll of the 1980s.

“Can’t Get You Out of My Head,” a track from “Fever,” drew loud cheers at the Big Dome, as well as most of the other dance tunes that she sang accompanied by a live band.

Remarkably, she saw no need for vocal enhancements or to lip-sync; her voice may not be exceptional, but it was real.

The songs had a humorous way of distinguishing Minogue’s rabid fans from the plain curious among the crowd. Many sang along to the lyrics; some were just clueless.

A big number of Manila’s gay population also turned up, some of them decked out in outfits that approximated their idol’s taste for fabulous attire.

Is that the only reason Minogue is regarded as a gay icon?

The LED screens offered a clue: Close-up video shots of male torsos, some tied up in bondage, were flashed in songs such as “Cupid Boy.”

If Minogue is known primarily for love tunes, not a few of them explore the adventurous, offbeat kind.

She also liked to play around with opposite images. The song “There Must Be An Angel (Playing with My Heart)” came complete with a black man dressed as an archangel descending and flying above the stage. Soon after, Minogue proceeded to sing a number called “Better the Devil You Know.”

Going all the way in portraying her Aphrodite persona, she sang atop a statue of a horse in one instance, and then in a boat with a big harp in it.

All these and other scenes, which unfolded on a stage with Grecian columns, could pass for classic musical theater.

Good thing it was held at the Big Dome. Otherwise, the rains would have easily ruined the setting.