After 28 years in North Korean camp, survivor speaks out 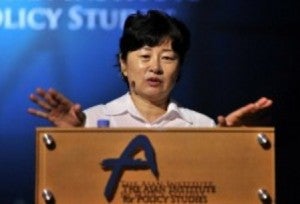 SEOUL, South Korea – Kim Hye-Sook survived a total 28 years of brutality, overwork and near-starvation in one of North Korea’s notorious prison camps. Now she travels the world campaigning to shut them down.

Kim, who escaped to South Korea in 2009, has spoken out in the United States, Switzerland, Japan and other nations about her horrific experiences.

“Human lives were worth less than those of flies,” she told a US congressional panel last September.

Kim heads an activist group publicising the camps and has started painting some of the scenes she witnessed, to try to help the world understand.

“I remember seeing streets filling with corpses and public executions being held everywhere,” she told a forum in Seoul late Thursday.

“I haven’t much education. But I paint and tell the same story over and over in hopes that someday, the camps will be shut down for good,” said Kim, whose exact age is not known but is around 50 years old.

Kim was sent to political prisoner camp Number 18 with her family in early 1975 when she was just 13 under the principle of “guilt by association”, because her grandfather had escaped to South Korea.

She sobbed repeatedly Thursday as she talked of her life working in a coal mine and of the fate of her family.

“My brother and mother died at the camp. I don’t know the whereabouts of my father,” she said, swallowing back tears. Two sisters and another brother are still in the camp, as far as she knows.

Kim said most young men assigned to the mines died before aged 30 from pneumonoconiosis, a chronic respiratory disease, and only seven out of 26 in her own work squad had survived when she was released.

“I also had the disease when I came to South Korea and am almost certain I would’ve died soon if I had not been treated quickly,” she said.

Prisoners, Kim said, were at the mercy of “unbelievably evil” officials whom she termed “worse than animals”.

Inmates were beaten or publicly executed for all sorts of reasons — stealing food, trying to escape and even for asking why they had been detained.

“While they never provide electricity to the people (in North Korea), they set up four-metre-high wire fences with electricity flowing at all times around the camp,” she said.

After she was released in 2001 under an amnesty, Kim fled to China. She was caught and sent back to the same camp in 2007.

But now she knew the camp “inside out” and had 8,000 yuan earned in China, which she hid by swallowing it in a tight roll.

Eventually, she said, she managed to escape at night in her bare feet, and after another spell in China reached South Korea via Laos and Thailand.

South Korea’s state human rights watchdog and other groups say there are six such political prison camps housing a total of around 200,000 prisoners.

Many of those jailed in recent decades were desperate people who fled the country to seek food or work rather than dissidents, the South’s state body said in a report last month.

One female former student was serving a term for having a western-style dance with a foreigner, another student was incarcerated for singing a South Korean song, its report said.