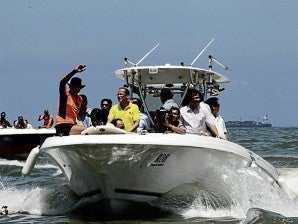 CRUISING President Aquino takes a speedboat from Malacañang to inspect the progress of the Pasig-Marikina River Channel Improvement Project. Its two phases are 87.99% complete. These included dredging and widening operations. This project is part of the P13-B flood control master plan that will take 3 years to complete. MALACAÑANG PHOTO BUREAU

Stretches of the Pasig and Marikina rivers are now wider and deeper—hopefully enough to prevent a repeat of the 2009 “Ondoy” tragedy.

This was according to Secretary Ricky Carandang, who made a report after President Benigno Aquino III spent Friday morning inspecting the progress of the Pasig-Marikina River Channel Improvement Project.

The president toured the river on a speedboat from his riverside residence in Bahay Pangarap in Manila to the Napindan flood control facility in Marikina City.

“What we’re hoping is that, with this, we will be able to avoid the Ondoy type of flooding that we saw before,” Carandang said in a Palace briefing, referring to the tropical storm that caused flash floods of unprecedented magnitude in the capital and parts of Luzon in September 2009.

He said two phases of the channel improvement were 87- to 99-percent complete. These included dredging and widening operations and increasing the height of river walls, he said.

Carandang cited the overflowing of the Wawa River, whose tributaries lead to the Pasig River, as among primary causes of flooding in Metro Manila.

“So what we saw this morning was one effort to increase the holding capacity of the Pasig River,” he said, adding:

“[The President] was generally pleased with the progress. [Public Works] Secretary Singson has done a pretty good job of completing the project and we’re hoping that this will help alleviate the flooding … It appears that all the things Secretary Singson promised were either already done or are being done.”

Carandang said the projects President Aquino inspected on Friday were part of a bigger, P13-billion flood control master plan that would take two to three years to complete.

“For us to really resolve this flooding problems, we need to go into that two to three-year project that creates the retarding basins and the dam and all of that. This should minimize the impact of the floods,” Carandang said.