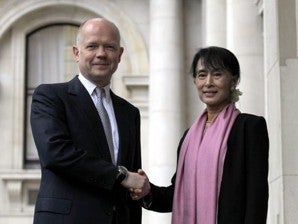 LONDON — Myanmar opposition leader Aung San Suu Kyi will address lawmakers from both houses of the British Parliament, one of the few non-heads of state to be given the honor.

She also is due to meet Prince Charles and his wife, Camilla, and to hold talks with Prime Minister David Cameron at 10 Downing Street on Thursday.

Suu Kyi, who spent many years under house arrest in Myanmar, is making her first overseas trip in 24 years. She has visited Switzerland, Norway and Ireland and is spending a week in Britain, where she studied and lived for many years.