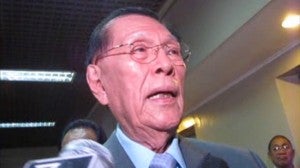 Senate President Juan Ponce Enrile on Thursday warned the Aquino government against mistreating former President Gloria Macapagal-Arroyo, noting that she has not yet been convicted in the electoral sabotage case filed against her.

“No matter how bad they think about her, she is presumed innocent until she is really convicted,” Enrile said in an interview with dwIZ radio.

Nor is Enrile amenable to suggestions that Arroyo, who is now a Pampanga congresswoman, be transferred from the Veterans Memorial Medical Center suite in Quezon City where she is being detained to a regular jail while she is on trial.

Placing Arroyo in the company of common criminals would not sit well with the international community, considering that she is a former president, he said.

“What if she dies in jail? How would it look like to the rest of the world when you put a former president in jail together with (common criminals)?” he said.

The Senate President said he had received information that the former President remains in “critical” condition, apparently because of a lingering problem with her cervical spine.

“My information is that she cannot swallow, she takes only liquid, and no doctor here wants to handle her,” he said in Filipino.

“I think if something happens to her, that would be a big issue,” he said.

Enrile reminded the administration of political upheavals in the past triggered by the death of a political figure.

He noted that the martyred opposition leader Benigno Aquino Jr., the father of President Aquino, had been allowed to seek medical treatment abroad despite being convicted by a military court during the Marcos regime.

Enrile served as the defense minister of the dictator Ferdinand Marcos and was one of the key implementers of martial law. His defection along with then Vice Chief of Staff Gen. Fidel Ramos triggered the first Edsa People Power Revolution in 1986.

“So long as it was (a) medical (case), we allowed prisoners to go to the hospital because it was a matter of life and death,” he recalled.

In the case of Arroyo, Enrile pointed out that she remains an accused.