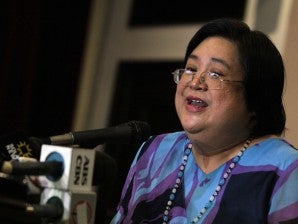 MANILA, Philippines – All media outfits will be allowed to cover the selection process for next Chief Justice, Judicial and Bar Council member Jose Mejia said over Radyo Inquirer Tuesday.

Mejia said that the JBC has not yet come up with the complete guidelines for the media coverage, but noted that even in the past, interviews have always been open to the public.

Before, he said, there was one camera inside the room where interviews were being conducted and that there was a big screen for live viewing outside the room. The quality of the viewing from the big screen, however, was low, Mejia added.

Acting high court spokesperson lawyer Gleo Guerra, in a separate interview over Radyo Inquirer, clarified that interviews have always been open to the public and what was forbidden then was the live TV and radio coverage.

Mejia said questions from the public would have to be given to the JBC members because they were the ones who would directly ask questions to the nominees.

The JBC announced Monday that live media coverage would be allowed during the selection process for next Chief Justice.