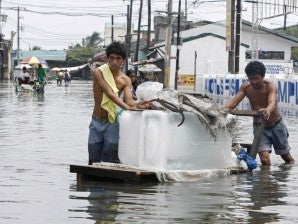 In Navotas, Balbaboco said the road in front of its city hall remained flooded, as well as the North Bay Boulevard between C3 and Lapu Lapu Avenue.

Roads along the Camanava area are now passable, he said.

He said half-tire flooding was also reported along Edsa-Balintawak earlier Monday but receded just after 30 minutes.

The bad weather also prompted the cancellation of classes from pre-school to high school in both private and public schools in Malabon Navotas, and Pasay, as well as in Obando, Bulacan earlier Monday.