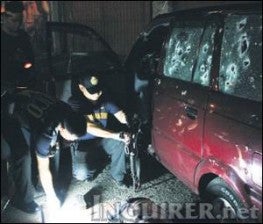 Finally, the wheels of justice have started to turn for the family of Alfonso de Vera, the vacationing seaman who was killed together with his 7-year-old daughter during an exchange of gunfire between police and suspected robbers in Parañaque City in December 2008.

The Court of Appeals has ordered the arrest of eight Parañaque policemen involved in the shootout with members of the Waray-Waray robbery group that left 16 people dead, including De Vera and his daughter Lia Allana.

The number of fatalities in the hourlong gun battle, which also resulted in a sudden drop in robberies in Metro Manila, was the biggest in police records of recent clashes between law enforcers and criminals.

In its June 15 resolution, the Court of Appeals said Parañaque Regional Trial Court Judge Jaime Guray committed grave abuse of discretion when he junked for lack of probable cause the resolution of the Department of Justice (DOJ) that recommended the filing of a multiple-murder case against the policemen.

In overturning the lower court’s decision, the appeals court said that “there is ample evidence and sufficient basis on record supporting a finding of probable cause.”

The court described the judge’s decision as “a rush to judgment without deliberate evaluation of the evidence from both sides demanded by a full trial.”

“(Guray) gravely abused his discretion in dismissing the criminal case filed against the (policemen) for lack of probable cause on the ground that the evidence tends to show that they acted only as members of a blocking force during the shooting incident which led to the death of (the De Veras),” it said.

The case against the policemen stemmed from the complaint filed in the DOJ by De Vera’s wife, Lilian, who claimed that the policemen were involved in the killing of her husband and daughter.

But Philippine Daily Inquirer sources said De Vera and his daughter may have been killed by agents of the Naval Intelligence and Security Force, whose involvement in the police operation was never explained by the Philippine National Police and the Armed Forces of the Philippines.

In her complaint, Lilian de Vera said her husband and daughter were in the family car when the gun battle between the policemen and the robbers happened.

The shootout happened at United Parañaque Subdivision 4 in Barangay (village) Marcelo Green, Parañaque, on the night of Dec. 5, 2008.

Lilian said her husband and her daughter were going to fetch her in Pasay City when the policemen fired at them repeatedly, apparently mistaking the family vehicle for one of the robbers’ getaway vehicles.

When the shooting stopped, the bullet-riddled body of De Vera was found slumped near a parked passenger jeepney, where he reportedly tried to take cover.

His daughter’s body was found in the family vehicle, which had more than 80 bullet holes.

Fourteen other people, including eight suspected robbers and a policeman, were also killed in the gun battle.

On Dec. 28, 2009, the DOJ recommended the filing of  criminal charges against the policemen, but Guray ordered the dismissal of the case for lack of probable cause.

Read Next
UNA keeps waiting game on Senator Pimentel’s next move
EDITORS' PICK
Heads may roll at BOC, says Palace if sugar smugglers are allowed to use recycled import permits
What to watch out for when selecting a video surveillance solution
Apple warns of flaw that lets hackers into iPhones, Macs
House energy committee chair Arroyo bats for cheap electricity
46% of schools nationwide to have full face-to-face classes on Aug. 22
vivo brings to the Philippines a powerful smartphone with a slimmer body, the vivo Y02s for only PHP 6,499
MOST READ
DepEd to give teachers P5K cash allowance within first week of classes
LOOK: Miel Pangilinan dazzles in glittery pre-debut shoot
DOJ indicts bank officer in $2.1 billion Wirecard fiasco
PH importing sugar after all: Marcos okays 150,000 MT
Don't miss out on the latest news and information.