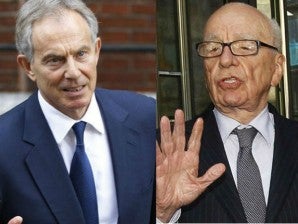 LONDON — Rupert Murdoch took part in an “over-crude” attempt by US Republicans to push Tony Blair into action before the invasion of Iraq, the former British prime minister’s ex-media chief claimed Saturday.

Alastair Campbell said the News Corporation media baron warned Blair in a phone call of the dangers in delaying signing up to the March 19, 2003 invasion, as part of an attempt to speed up Britain joining the military campaign.

The claim came in “The Burden of Power: Countdown to Iraq” — the final volumes of Campbell’s diaries from his years at Blair’s side, which are being serialised in The Guardian newspaper.

Campbell suggested Murdoch made moves to help the right-wing Republican Party of then US president George W. Bush before the March 18 vote in the British parliament’s lower House of Commons on deploying troops to Iraq, which was passed.

On March 11, 2003, Campbell wrote that Blair “took a call from Murdoch who was pressing on timings, saying how News International would support us, etc.

“Both TB and I felt it was prompted by Washington, and another example of their over-crude diplomacy. Murdoch was pushing all the Republican buttons, how the longer we waited the harder it got.”

The following day he added: “TB felt the Murdoch call was odd, not very clever.”

Blair faced a tough challenge getting his centre-left Labour Party lawmakers to back Britain’s involvement. They rebelled in large numbers.

Speaking to The Guardian, Campbell said Murdoch’s intervention came “out of the blue”.

“On one level (Murdoch) was trying to be supportive, saying ‘I know this is a very difficult place, my papers are going to support you on this’. Fine.

“But I think Tony did feel that there was something a bit crude about it. It was another very right-wing voice saying to him: ‘Look, isn’t it about time you got on with this?’

“I think, as I recall Tony saying, he didn’t think it was terribly clever.”

In response, Murdoch’s company said: “It is complete rubbish to suggest that Rupert Murdoch lobbied Mr Blair over the Iraq War on behalf of the US Republicans.

“Furthermore, there isn’t even any evidence in Alastair Campbell’s diaries to support such a ridiculous claim.”

Campbell’s diaries also recorded that Blair was “thwarted” from joining the euro currency in 2003 by his finance minister Gordon Brown, who took over as prime minister in 2007.

“Things just hadn’t worked on the euro and TB was pretty fed up… The judgment was settling that GB had basically thwarted him,” he wrote.

Brown moved so aggressively against Blair, demanding he step aside soon after the September 11, 2001 attacks on the United States, that Downing Street concluded in 2002 that Brown was “hell-bent on TB’s destruction”.

Brown “could be extraordinarily difficult to deal with”, Campbell told The Guardian.

“But on the other hand he could be absolutely brilliant.”

He said Blair toyed with sacking Brown but said he stuck with him as “‘when it comes to ability, he and I are head and shoulders above the rest’.

“That may sound a bit arrogant but most people will accept that.”

Read Next
Saudi women urged to flout driving ban
EDITORS' PICK
What to watch out for when selecting a video surveillance solution
DOH says COVID-19 cases plateauing, but public shouldn’t be ‘complacent’
House energy committee chair Arroyo bats for cheap electricity
Unleash the photographer in you this World Photography Day with vivo smartphones
23,000 cops to be deployed nationwide for school reopening
Look Through: The fate of impounded stray dogs
MOST READ
Sharon Cuneta asks for prayers for friend in ICU who suffered silent stroke
Light therapy could be the answer to your sleep problems
Korina Sanchez reunites with former ABS-CBN co-anchors Julius Babao, Cheryl Cosim
Solons file resolutions seeking probe on ABS-CBN, TV5 merger
Don't miss out on the latest news and information.