Veco bills in June to reflect P1 per kwh increase 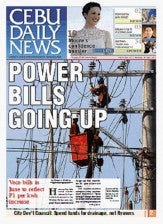 Households and commercial establishments in Metro Cebu can expect their electric bill to go up this month by P1 per kilowatt hour.

The Visayan Electric Company (Veco) yesterday said this was a “pass through” charge they have to collect from customers due to a steep increase in the price of power sourced from the Wholesale Electricity Spot Market (WESM) in May and a higher generation charge of the National Power Corp. (Napocor) approved by the Energy Regulatory Commission (ERC)

The hot summer month of May, where consumers use more electricity, was also cited as a factor.

Demand for power reached 405 megawatts (MW) in May compared to only 349 MW in April, said Ricardo Lacson, vice president for administration and customer services, in a press conference.

The generation cost adjustments will be reflected in the June 2012 billing.

The adjustment starts June until the year 2024 in all electricity producing companies nationwide, as approved by the ERC.

“We were not able to release these charges in the April and May billing because the decision of the ERC was just released recently,” explained Lacson.

He said Veco does not profit from the increase. The higher generation cost is a “pass though charge.”

“The amount collected by generation companies is the same amount Veco will collect from its customers,” said a Veco statement.

“This cost will also vary every month based on several external factors such as fuel prices, the foreign exchange rate and the supply-demand situation.”

Veco is the country’s second largest private electric utiilty, serving more than 275,500 customers in the cities of Cebu, Mandaue, Talisay and Naga along with five municipalities in Metro Cebu.

It is managed by the Aboitiz and Garcia families of Cebu.

All power distribution companies are required to source at least 10 percent of their power needs from WESM, a venue where electricity is traded like any other commodity.

“We have to follow the power demand of the customers no matter how expensive it is so we have to impose the increase.” Lacson said.

“The generation charge is 85 centavos plus the other charges and government taxes which leads to a P1 per kilowatt increase to customers,” said Ethel Natera, Veco corporate communications manager.

The WESM power increase is due to factors of high power demand and low availability of coal-fired and hyrodelectric power plants in Luzon, which is interconnected to the Visayas power grid, said Veco.

The average WESM purchase price went up to P9.9578 per kwh last month compared to P4.8450 per kwh on April.

Under Section 30 of Republic Act No. 9136 or the Electric Power Industry Reform Act (EPIRA), the Department of Energy shall establish a wholesale electricity spot market to provide the mechanism for identifying and setting price of electrictiy of actual variations from the quantities transacted under contracts between sellers and purchasers of electricity.

Veco said it will also start implementing this month the NPC/PSALM generation adjustment approved by the ERC.

The approved increase in the Visayas is 60.60 centavos er kwh.

But since Veco sources only 30 percent from NPC/PSALM, the impact on Veco’s generation rate is only 33.69 centavos for the June billing and 19.62 centavos per kwh for May.

“The adjustment that we made is not that big compared to other power companies because we only use 30 percent of NPC power supply,” said Lacson.

He said the money that will be collected in the generation adjustments will be used for electrical repairs in affected areas. Lacson also encourages the public to report any brownouts so the company can address the outage immediately.

Read Next
‘Yes to drainage, but don’t cancel flyovers’
EDITORS' PICK
Acer starts the year off strong with the Aspire Vero National Geographic Edition
Comelec division junks petition to cancel Marcos COC for president
PH logs 37,070 more COVID-19 cases; over 33K others recover
The best of bayside and city living at SMDC’s Sail Residences
‘Not yet the end’: Lawyer says Marcos Jr’s DQ cases to take lengthy process
Over 3 Million worth of prizes to be won at Smart Padala’s SENDali Manalo Promo!
MOST READ
NBI foils escape attempt of Kerwin Espinosa, two others
Marcos camp ‘extends hand of unity’ after COC cancellation bid is thrown out
Wendell Ramos finally gets to hold his newborn for the 1st time
No vaccine, no French Open for Djokovic, says French Sports ministry
Don't miss out on the latest news and information.