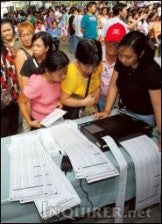 MANILA, Philippines—The Commission on Elections (Comelec) is willing to conduct a public demonstration to remove doubts about the performance of the controversial Precinct Count Optical Scan (PCOS) machines that will be used in the 2013 polls.

“We are open to [a public demonstration] in the spirit of transparency. As a matter of fact, we have a scheduled demonstration in Congress. Sen. Aquilino Pimentel III requested for a demonstration. So why not?” Comelec Commissioner Rene Sarmiento told reporters.

“The Comelec is prepared [for a public demonstration]. As a matter of fact the machines are subject to inspection once we receive them. This is to ensure that the glitches have been addressed. That is included in our contract,” he added.

Sarmiento said the Comelec en banc would have to discuss the mechanics of the public demonstration but he added, “I think no one will object to that.”

Earlier, Cagayan Rep. Jack Enrile urged the Comelec to make a voluntary demonstration of the PCOS machines features and operation to prove that the technical glitches in the 2010 polls have already been corrected.

The Supreme Court on Tuesday upheld the Comelec’s decision to purchase 82,000 PCOS machines worth P1.8 billion from its 2010 automation service provider, Smartmatic Corp.

The Center for People Empowerment in Governance, a member of the coalition that sued Comelec before the Supreme Court to stop the purchase of the PCOS machines, called on Smartmatic to disclose to the public the ownership of the voting technology, all the major and minor errors and bugs detected, and the supposed correction that was made.

“As their sovereign right, the people should be informed fully of the internal and external mechanisms of the election system,” CenPEG policy director Bobby Tuazon said in a statement.

“We’re okay with the idea of meeting them, provided the invitation to participate is sincere. Maybe they won’t even listen to us. We all want automation to be successful,” Lagman told the Inquirer in a phone interview.

Lagman, an Information Technolgy expert, had to quit the poll body after Malacañang failed to reappoint him in April.

The Supreme Court has posted its decision on the PCOS case on it’s website.