PNP to accept whomever Aquino appoints as DILG chief—Bartolome 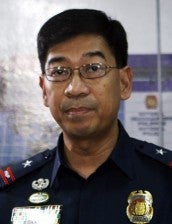 MANILA, Philippines—Philippine National Police Director General Nicanor Bartolome refuses to be drawn into intrigue over rumors that Senator Panfilo Lacson may take over as interior secretary, a post that comes with supervisory powers over the police force.

In a press conference, the PNP chief said the 140,000-strong organization would accept whomever is   designated to the position currently occupied by Interior Secretary Jesse M. Robredo.

“The President has a decision to make…. We will accept whatever decision of the President,” Bartolome told reporters Friday.

The PNP, he said, will continue to cooperate and work closely with the Department of the Interior and Local Government,  whether Robredo retains his post or Lacson, whose Senate term will expire in 2013, is appointed.

President Benigno Aquino last week suggested he might ask Lacson and Senator Francis Pangilinan, who is also no longer eligible to run for reelection, to join his Cabinet although he did not indicate which positions.

Asked about the matter last week, Robredo said he was not in any way threatened by the rumors even as he made clear that his tenure was only as secure as Aquino’s confidence in him.

“I know I am occupying a post of a casual employee,” he said.

Robredo, along with four other Cabinet members, has been repeatedly bypassed by the Commission on Appointments, and is expected to appear before the powerful body when it resumes sessions next month.