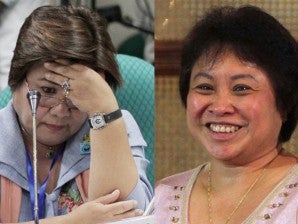 Can the country afford to have a Chief Justice who would serve for nearly two decades through three Presidents?

Henares is 51 while De Lima is 52—meaning by the time one of them reached the mandatory retirement age of 70, she shall have spent at least 18 years in the Supreme Court. The President’s term is limited to six years.

Escudero, a member of the Judicial and Bar Council, said youth should not be taken as a “handicap” for an aspiring Chief Justice. But he urged President Benigno Aquino and the six other JBC members to carefully weigh their pros and cons.

“It has advantages and disadvantages, which you really have to consider holistically,” he said at the weekly Kapihan sa Senado media forum.

Assuming that the next Chief Justice is 42 years old like him, Escudero said the magistrate would sit in the Supreme Court for close to three decades.

“The JBC and President Aquino should weigh (the matter). Do we want a Chief Justice who would serve that long?” he said.

“If you’re after stability and predictability of decisions of the court that will last a long time, then perhaps, you might want to go for that (young Chief Justice),” he said.

“If you’re after a new perspective every once in a while and not tie the hands of the next President and be bound by the choice of this President for the next four to five Presidents, that will be subject to the exercise of the President’s wisdom and in a way the discretion of the JBC as well.”

Henares earlier claimed that she has an “edge” over other nominees to the post of ousted Chief Justice Renato Corona.

“I’ve experienced the complaints of people about the adjudication system, from arbitration in the National Labor Relations Commission, all the way to fighting for your rights, you’re bumping against big establishments,” she had said.

One is free to dream

“So, I would say that I have an advantage over all the other people because I personally experienced all in the system itself.”

Escudero responded that one was free to dream and express a belief in one’s self. “I don’t want to prejudge my vote for or against anyone in the selection of nominees,” he said.

The senator said he could work “for or against” relatively young candidates like Henares and De Lima.

“It’s not an automatic disadvantage,” he said.

Henares, a shooting buddy of Mr. Aquino, and De Lima both testified against Corona in his impeachment trial. Henares is also conducting a separate investigation of Corona and his family for possible tax evasion.

De Lima has a pending disbarment case filed by a private lawyer for calling Corona in public as “a tyrant who holds himself above justice and accountability.”

Last year, she defied a Supreme Court temporary restraining order (TRO) allowing former President and now Pampanga Representative Gloria Macapagal-Arroyo to seek medical treatment abroad because no charges had been filed against her at that time.

The TRO prompted the Department of Justice and the Commission on Elections to rush an electoral sabotage case against Arroyo. A Pasay judge later ordered her arrest.

On Thursday, the JBC received the nominations of former Solicitor General Frank Chavez and former Makati Representative Teodoro Locsin Jr. The JBC has so far received 18 nominations for Corona’s vacant post, including those for acting Chief Justice Antonio Carpio and four other senior justices of the high tribunal.

Chavez, a graduate of the University of the Philippines Diliman College of Law who served under the late President Corazon Aquino, was nominated by Manuel Baviera, a founding member of the Whistleblowers’ Association, for his “proven competence, integrity and probity.”

“If and when appointed as the next Chief Justice of the Supreme Court, Chavez will no doubt immediately regain the people’s confidence in the judiciary, weeding out the so-called  ‘hoodlums in robes,’” he said. Chavez is “known to be loyal only to the Constitution and the laws of the land and no one else.”

“Mr. Locsin’s three-decade career as a private (lawyer), writer, journalist, broadcaster, lecturer, Cabinet member, presidential legal counsel, corporate director and legislator has equipped him with a wide range of experience in nearly every area of law and uniquely qualifies him for this position,” the two said.

Locsin earned his law degree from Ateneo de Manila University and finished his master’s in law from Harvard University in Boston, Massachusetts.

House Deputy Minority Leader Milagros Magsaysay on Thursday said the selection of the new Chief Justice should be based on a long list of candidates and done fairly.

“The new Chief Justice should be an instrument of unity and must be accepted not only by his or her peers in the judiciary but also the people,” Magsaysay said in an e-mailed statement to reporters.

“The choice should not be tinged with politics as this will only serve to undermine the people’s trust in the judiciary which has been besieged with issue after issue following CJ Corona’s impeachment.”  With reports from Marlon Ramos and Cynthia D. Balana