Aquino to farmers: You will have land | Inquirer News
Close
menu
search

Aquino to farmers: You will have land 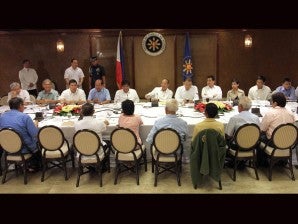 FACE-OFF President Aquino and his Cabinet officials hold a dialogue with farmers and their representatives at Heroes’ Hall in Malacañang on Thursday. The farmers who marched to Manila from the provinces in the south had earlier threatened to stage a hunger strike to demand the full implementation of land reform. LYN RILLON

Addressing personally for the first time concerns of peasants and prelates, President Benigno Aquino on Thursday vowed to fully implement his mother’s 24-year-old agrarian reform program and allocate the necessary funds for the effort before its expiration in two years.

Briefing reporters after the two-hour meeting in Malacañang with representatives of the farmers and the Catholic Bishops’ Conference of the Philippines (CBCP), presidential spokesperson Edwin Lacierda also said the President directed the military and police to ensure “the peaceful and orderly installation of farmer-beneficiaries of all lands under the program.”

The meeting was hastily called Thursday just after noon on a day some 300 farmers were to begin a hunger strike to press Mr. Aquino to make a firm commitment he would implement Carper within its mandated term, an issue he had ignored even in his State of the Nation Addresses.

Leaders of Task Force Mapalad (TFM), a civil society organization helping the farmers, said the hunger strike had been called off temporarily until the farmers were satisfied that Malacañang would carry through its promises.

Christian Monsod, TFM counsel, said the farmers were “very happy” with the President.

“He opened the doors. He said he can meet them when they need him,” said Monsod, who participated in the meeting marking the first time Mr. Aquino, himself a wealthy landowner, addressed the issue he had previously left to his aides to deal with.

“That’s sending a message that the President is hands-on and that Malacañang is on top of hastening the implementation of land acquisition and distribution,” said Butch Olano, a TFM board member.

Lacierda said that the Armed Forces of the Philippines, Department of the Interior and Local Government (DILG) and the Philippine National Police would be mobilized for the distribution  of nearly 1 million hectares of land, comprising some of the country’s prime agricultural estates, yet to be covered by the Comprehensive Agrarian Reform Program (CARP).

CARP was launched by the late President Corazon Aquino in 1988 as the centerpiece of her social justice promise to ease widespread poverty and remove one of the major causes of a simmering communist insurgency. It was extended for another five years in 2009 with a total allocation of P150 billion and is now called CARP extension with reforms, or Carper. It expires on June 30, 2014.

“Between now and June 2014 all agricultural land shall be covered and distributed to qualified beneficiaries. Priority shall be given to landholdings 25 hectares and above and notices of coverage shall be issued on or before December 2012,” Lacierda said.

Asked whether the President mentioned what would happen if the government failed to meet its target, Lacierda said, “Our commitment is to put all the agricultural lands under notices of coverage that will ensure the implementation of the Carper beyond 2014.”

Some 300 farmers had staged a 10-day march from their farms in Negros Occidental, Davao and Bukidnon provinces to dramatize their concerns that the Department of Agrarian Reform (DAR) under Mr. Aquino was “consistently underperforming,” an apprehension contained in a letter prepared by the Catholic Church and sent to Mr. Aquino on June 1. The letter was endorsed by 52 of the 100 members of the CBCP.

Olano said that Mr. Aquino basically agreed to implement commitments made by Cabinet officials in a meeting at the Palace on June 8 when the farmers marched on Malacañang at the end of their long march while Mr. Aquino was in London.

The members of the Catholic Church present were Ipil Bishop Antonio Ledesma of the CBCP, Association of Major Religious Superiors of the Philippines executive director Fr. Marlon Lacal and Fr. Anton Pascual of Caritas Manila.

Lacierda indicated that the government would start allocating the budget required under the law for the program. 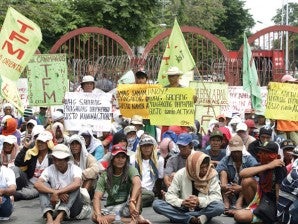 The farmers wait at nearby Chino Roces Bridge (formerly Mendiola Bridge) to await the results of the meeting. LYN RILLON

“So every year, you have P30 billion. We expect, because of the agreements today, that we will be able to use up the P30 billion in the year as it is mandated,” Lacierda said.

“The farmers spoke of some bureaucratic red tape and the President committed to ensure that we’re expediting the entire process of land distribution,” Lacierda said.

“That’s the reason why we are setting up, number one, on the side of both farmer representatives, Church, and the government this multistakeholder mechanism to make sure to follow up the procedure and the cases of each claim folder,” he said.

Lacierda said both sides agreed to the mechanism to be composed of representatives from the DAR and other CARP-implementing agencies of the government, Church, NGOs, peoples’ organizations, and other farmer groups and federations.

Doing away with red tape

The panel will  be immediately established to monitor the implementation of CARP, especially on coverage and distribution of agricultural lands, movement and performance of DAR personnel, delivery of support services to the beneficiaries, and budget allocation and utilization.

“There will be a fast-tracking of the resolution of pending cases on stock distribution options and lease back arrangements before the Presidential Agrarian Reform Council, or PARC,” Lacierda said.

On the difficulties to implement land reform in privately owned lands, Lacierda said, “[That’s] the reason why it is a multidisciplinary approach.”

“That’s why the DILG is there, the DAR, the DA (Department of Agriculture), the DENR (Department of Environment and Natural Resources) are all going to be involved. We’re making sure that the processes within the DAR will be expedited,” Lacierda said.

Lacierda said that judicial adjudication in the implementation of the Carper law was “beyond our sphere of influence.”

“But, insofar as the executive branch is concerned, we are committed to putting all agricultural lands based on the timeline that we’ve provided with a notice of coverage,” Lacierda said.

“To this end, the DBM (Department of Budget and Management) has committed the immediate release of P1 billion pesos to be allocated for support services,” he added.

Lacierda said Land Bank of the Philippines would review its policies, rules and regulations on providing credit to farmers to make it more accessible to agrarian reform beneficiaries.

“In addition, the DAR and the Department of Agriculture with assistance from DBM will develop a socialized credit program solely for ARBs, or agrarian reform beneficiaries, that is mutually acceptable to both parties,” Lacierda said.

“Socialized credit programs shall enable the farmers to maximize the productivity of their land and utilize the resources available to them,” he said.